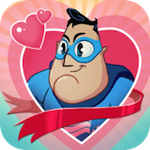 Heads up: there’s now more new stuff to do in Middle Manager of Justice (Free), if you’re still up for it. A recent update has added some new mechanics, as well as a new character into the whimsical free-to-play simulation.

One of these new things is called “Most Wanted Thugs." That’s a fancy phrase that seems to mean “harder thugs," specifically made for pro-level players who are tearing through the game’s basic enemies like no-scope e-sports athletes. The encounters are randomized and these dudes drop rare loot, too. The update also adds in meteorites which are drops that can be equipped to “give your hero special bonuses." When combined, you get more powerful ones.

Lastly, a new hero has introduced: Gloomerang. According to the patch notes, which are available on AppShopper and more succinctly on the Double Fine message board, notes that she’s got a lot of group-oriented attacks.

Middle Manager of Justice is a pretty neat game if you can get beyond the free-to-play part or deal with it. You can check out our review here, or hey, download the game for the generous price of zero bucks.