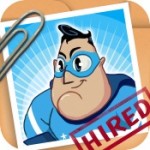 Double Fine Productions has entered the freemium market with their new Superhero management sim Middle Manager of Justice (Free), a game that has been hotly anticipated since it’s announcement, early release, and subsequent yanking from the App Store.

Is this the game that will revolutionize the free-to-play market and bring about a golden age of games you don’t have to pay a penny for (unless you want to), or is this just another big studio getting in on the freemium shtick? The answer, like the game’s title, is that it is somewhere in-between.

If you played the accidental early-release, you already have a good idea what the game is like. The tweaks since then improve the game overall, but don’t change any of the fundamentals.

Middle Manager of Justice is at heart a two-currency, timer-based sim. That said, it is a lot faster-paced than your typical entrant in the genre, and even at the high-end, the timers remain manageable, and that may extend its appeal to fans of Kairosoft-style sims. It’s also got a distinctive cartoony visual style and it’s packed with jokes about the superhero biz that are pleasantly reminiscent of Superhero League of Hoboken. 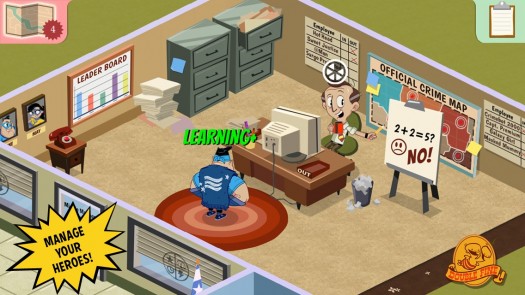 Heroing is a business in Middle Manager of Justice, which pokes fun at its own commercialization from the get-go, when a superhero and supervillain decide not to fight because it’s not in the hero’s contract and the villain has (evil) errands to run. Despite being a game where you can put your heroes to work telemarketing for extra cash, Middle Manager of Justice is basically silly rather than cynical.

The game’s sense of tension comes from the constant influx of new crimes, all of which are on timers that, if allowed to tick down, will decrease the reputation bonus your branch of Justice Corp receives for stopping them, and decrease the happiness of the citizens of that district (which means less cash). The catch is that your superheroes are RPG characters, and that improving their stats and powers requires training – and training takes time.

Rather than interminably long waits, the paywall in Middle Manager of Justice comes in the form of not having enough time to do everything you need to. The game’s control currency, Supremium, is doled out in sufficient quantities for you to buy new heroes, but not to keep paying to skip timers. If Galaxy Girl wants to get her reps in and stop that out of control School Bus, she’ll have to shell out. 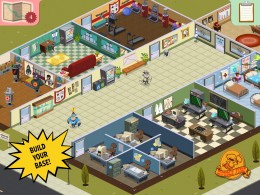 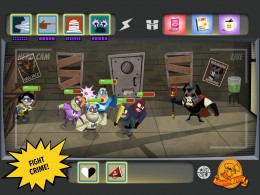 There is a way around this, and it works well enough that you can play through the entire game without spending money: let the city go to hell. You see, if you don’t take care of crimes and threats, they don’t go away, they just sit there at their lowest reward level, waiting for you. This makes the citizens of a given district very unhappy, but the consequences are easily reversible once you finish training or researching.

This works well enough mechanically, and can even be considered “strategic", but it breaks the heroic feel of the game and kills the dramatic tension. The game is at its best when you’re trying frantically to juggle responding to new crimes while resting, restoring morale, researching new gear, and doing all of that training. Of course, Double Fine was in a double bind here: they were trying to craft a free-to-play game with a sense of pacing and urgency, but “game over" is too harsh a consequence in this genre.

Middle Manager of Justice has one other significant flaw from a gameplay and monetization standpoint: not enough stuff to buy. There was some serious Sims-eque potential for customizing your base that wasn’t tapped, and I was frankly flabbergated to discover that the better “hero packs" do not contain new heroes, but only higher level versions of the basic ones. This may make it too attractive to just purchase the “1st Level" heroes and work them through the ranks, rather than spending money on the game.

The game’s fights with criminals and supervillains go a long way towards compensating for its flaws. This is one of the places where the tweaks since the accidental release really improve interest and balance. There’s witty repartee before every battle (and after “boss fights"), and rumbles proceed automatically and quickly, punctuated by the player’s strategic use of items and abilities. Middle Manager of Justice’s has a better RPG-style combat engine than many RPGs I’ve played, and one that is well-suited to mobile.

In the end, Double Fine has produced a superior freemium timer-based sim, but Middle Manger of Justice only mitigates the flaws common in it’s genre, it does not eliminate them.