If there were some sort of award for “game I’ve spent the most time playing since release" then I’m almost positive True Skate ($1.99) would be the winner. Since its release last October, and our subsequent review, I believe I’ve played True Skate every single day in at least some capacity. It’s just the kind of game that I can’t help but jump into whenever I have a free moment.

Last month we detailed a new skatepark that developer True Axis had in the works for True Skate, and as of today that update has gone live in the App Store. The new park is called Inbound and is available as a 99¢ in-app purchase. It’s an indoor skatepark and it’s absolutely massive, filled with all manner of different ramps, ledges and rails. The possibilities seem endless, and Inbound should keep True Skate’rs busy for a very, very long time.

The other big feature in this new update is the ability to customize your board. You can dive into your device’s photo collection and choose a picture to apply to the bottom of the board and even to the grip tape on the top. It’s great to finally be able to see something other than the default board, but my one gripe is that the system is very basic.

There doesn’t seem to be a way to adjust the size or position of the images you use, so you’re stuck with however the game ends up placing it on the board. I’ve been able to find images that look cool anyway, so it’s not a huge deal, but it would be a nice option to have. Also, the customization uses a similar system to the Slow Motion mode that was introduced in a previous update where customizing your board will cost you the True Credits that you earn through playing or by buying as IAP packs. Otherwise, if you wish, you can purchase unlimited customization for a one-time 99¢ IAP. 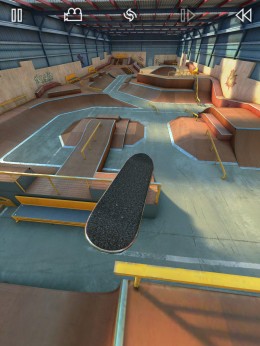 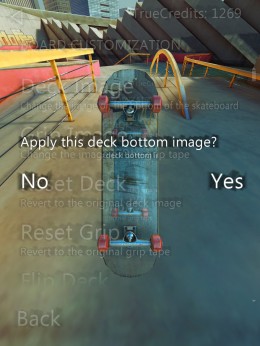 There are a bunch of other welcome new options in this update too. Setting a respawn point is now much easier to do right from the main game screen, and the physics engine now recognizes and locks into blunt slides on ledges much better. You now have the option to change the opacity of the HUD as well as turn off all the trick and scoring text that pops up on the screen for a much cleaner interface. I love that change a lot. There are also new missions and a new leaderboard for the new park, among many other tiny tweaks and fixes that make True Skate a better overall game.

You can join in on some discussion in our forums, and if you’re a massive True Skate fan like I am then you’ll want to check out this new update right away. True Axis says more updates are planned too, and I can’t wait to see what’s next.