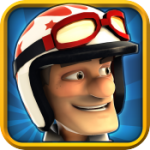 As mobile hardware reaches the point of being comparable to consoles, we’re seeing less and less “Game Boy" versions of popular gaming franchises. That is, it’s no longer becoming necessary to dumb down or limit a version of a console or PC game just to create a mobile version. In fact we’ve seen plenty of straight up ports of console and PC games that sacrifice very little technically in order to work on the iOS platform.

That’s all well and good, and I love taking carrying games like GTA: Vice City ($4.99) and Bastion ($4.99) around in my pocket wherever I go, but there’s almost always some sort of compromise you’ll need to be willing to deal with when shoehorning virtual controls onto a game that wasn’t meant for it. I’m fine with that for the most part, but it also makes me really appreciate those games that try to reinvent themselves with touchscreens in mind when transitioning to iOS.

One of the more recent and excellent examples of doing just that is Ubisoft’s Rayman Jungle Run ($2.99). It took the assets of Rayman Origins, a fantastic and critically acclaimed platforming game on traditional gaming systems, and repurposed them into an auto-running platformer built specifically for mobile touchscreen devices. We thought it was a hit because of how thoughtfully it was brought to iOS, and I’m pretty sure Apple liked it too. It definitely makes a difference when something is tailored for mobile. 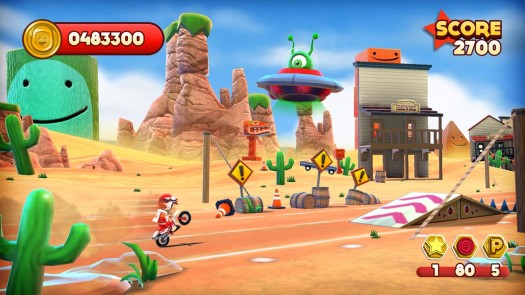 Which brings me to Joe Danger ($1.99) from Hello Games, quite possibly an even better example of taking a beloved game from consoles and desktops, blowing up everything that was originally made with physical controllers in mind, and rebuilding it from scratch for iOS. The result, my friends, is fantastic.

Joe Danger uses a simple but effective gesture control system. It’s practically a single-finger game. Your bike motors ahead on its own and you’ll hold down on the screen to hunker down and let go to pop a bunny hop. Tap again while in the air to do a double jump, and swipe horizontally or vertically to do a flip or a spin. While on the ground those swipes allow you to do wheelies, perform one of several showoff stunts like a superman, or change lanes during specific parts of a track. 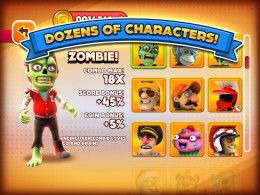 It works extremely well, and with some practice it becomes second nature to just be busting tricks at every opportunity and deftly avoiding obstacles as they appear on the track. Honing these skills is crucial, since the game gets quite difficult in the later stages. Really difficult, actually, but also really rewarding.

The game will throw a variety of different hazards and obstacles at you and you’ll need to make split second reactions lest you want to slam head-on into a gate or land in a shark tank (unless you’re trying to wrestle a shark, that is).

There are 50 levels in Joe Danger as well as a handful of coin-collecting bonus levels, spread throughout 10 different tours. Each of the 50 proper campaign levels has 3 goals to shoot for. Goals vary depending on the level, and include things like collecting every coin, tapping every letter in the background to spell D-A-N-G-E-R, beating an AI opponent to the finish line, or just for successfully making it to the end of the level itself.

Just making it to the end of a level isn’t typically too difficult, at least in the first half of the game, and you’ll likely be able to pick up a couple of other goals while you’re at it. However, to successfully earn a “Pro" medal for a level you’ll need to swoop up all 3 goals in one run, which can be quite a feat. 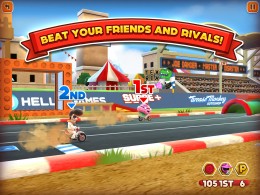 This is where the impeccable level designs really shine. Every level is meant to be played, replayed, and then played some more. Memorizing where certain items or hazards are, or which alternate paths to take in later levels, is not only a necessity if you want to fully beat each one but it’s also one of the most enjoyable aspects about the game.

Besides the goals described above, every level also has a high score trophy to shoot for and a hidden Hello Games icon to discover as well. Game Center is integrated so you can send challenges to your buddies, compete on leaderboards for every tour, and earn some achievements.

It’s this kind of variety and freedom that keeps Joe Danger feeling constantly fresh. If you run up against a particularly hard part of the tour you can switch things up and replay previous levels to nab some missed medals, or go for the high score goal. You can check out Game Center for some competition, see if you can scope out some hidden icons, or go blow some of your earned coins on some unlockable characters. I found that there’s so many different things to do in Joe Danger that I was always coming back to it.

On top of all this Joe Danger is one of the best looking iOS games. It basically looks just like the console games, and if you’re familiar with those you’ll recognize many of the sights and sounds in the iOS version. On the iPhone 5 and the newest iPad the visuals are dialed up to 11, but the game also supports a wide variety of older devices going all the way back to the 3GS.

Joe Danger is the complete package. It’s the console-caliber game that everybody craves on their mobile device, except in this case the console it was made for is actually the iOS platform. It doesn’t feel compromised, and offers entertainment in a number of ways that should appeal to a variety of different players. I honestly can’t think of anything I don’t like about it, it’s a shining example of how to do games right on iOS. More of these, please.