Gentlemen, start your speculation. As of this writing, the EA Asia web site for Real Racing 3 is listing the game as “OUT NOW." Now, who knows if this is just a simple error on EA’s part or if they’re gearing up for some sort of launch this week, but we’re so hungry for this game that I’m totally willing to get excited about random text on a web site. 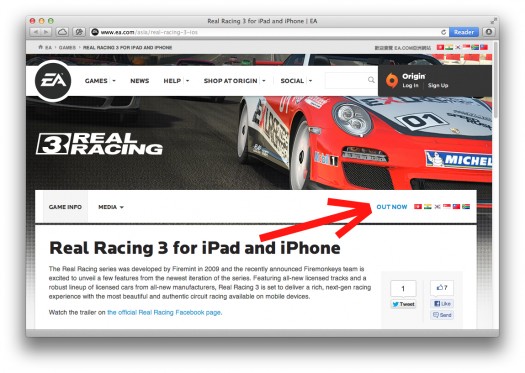 My finely tuned witching stick and tinfoil hat has had me suspecting for quite a while that we’d see a surprise pre-holiday release of Real Racing 3. I mean, when you think about it, it makes too much sense. Previous years have indicated that EA has nearly complete control of the App Store during the holidays, and Apple has featured Real Racing 3 at so many keynotes and press events now I imagine Firemonkeys basically has carte blanche when it comes to some massive featuring whenever the game is released.

And really, if you’ve got practically guaranteed Editor’s Choice, is there a better time to release a game than over the holidays, where your massive banner is the first thing little Jimmy sees when he loads up the App Store on his brand new iPad, iPhone, or iPod touch this Christmas? Of course we’ve yet to hear anything from Firemonkeys about the game’s release, and it hasn’t popped up on any of the various international App Stores yet… But, it’s still fun to hope.

With the iTunes freeze only a few days away, we’ll know fairly soon whether this is the case or not. It’s also 6:30 AM in Australia right now, so, in actuality, we might only have a few hours to daydream about a impending Real Racing 3 release before Firemonkeys shoot the idea down.

Our goal for Real Racing 3 is to create an experience that resets the bar for racing games on mobile, and we wanted to take some extra time to get it right. We look forward to releasing Real Racing 3 and all its new features such as Time Shifted Multiplayer, plus dozens of new cars and tracks, by the end of February.