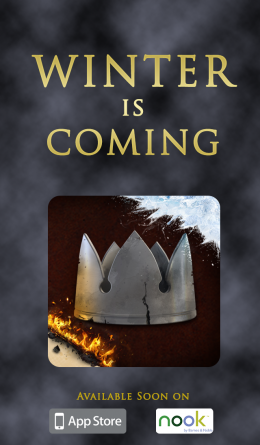 Here’s something strange that’s getting a lot of traction on Twitter: Is a Game of Thrones game coming to the App Store (and Nook)? Massive mega-fan site Westeros.org just posted the vague teaser image you see to the right of a definite Game of Thrones app icon. Now, before you roll your eyes and say, “Eh, they’re just releasing the books, dummy," consider this: The books are all totally available on both platforms. You can buy the Game of Thrones books individually and in a four book virtual boxed set (leaving A Dance with Dragons as the odd man out). You can also buy previous seasons of the show from the iTunes Store, and HBO has a number of official companion apps also available.

So, submitted for the approval of the Midnight Society, the suggestion of a Game of Thrones mobile game. My head is spinning with cool possibilities, ranging from things as simple as some sort of interactive gamebook to something as complicated as Clash of Clans where players can build their own armies, align themselves with one of the houses, and battle the others? When you’ve got a universe as vast as the one laid out in the A Song of Ice and Fire series, the possibilities are endless.

No further information seems to be available currently, but, seriously, I’d play the heck out of some sort of Game of Thrones game. Fingers crossed that’s what this is, and not just another weird tie-in app!