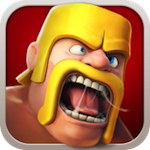 Clash of Clans (Free) is kinda wild, as far as free-to-play games go. In a nutshell, it’s basically every F2P game you’ve ever played rolled into one coherent package. Plus, each of its constituent parts are fleshed out enough to play exclusively. If you want to play it as a resource management game, you can. If you’d rather just build armies and treat it like one of those P2P Facebook war games, you can totally do that. If you’d rather just build a living, breathing kingdom with pretty buildings and layouts, knock yourself out. As our strategy thread is proving, Clash of Clans biggest strength resides in this flexibility.

People are responding to it, too, so I thought I’d give it a shot. I was a little surprised by how it subtly makes you a little bit more flexible, too. After a few hours you’ll probably start tiptoeing outside of your comfort zone, warring with other players or maybe thinking about how that gold mine is coming along a little too often. Eventually, you’ll start caring about your little village. That’s the story of my progression, at least.

It’s weird how it can grab you. For me, it happened slowly. When I first booted the game, I just wanted to play it like a resource sim and get my supply lines down. I blew through the five hundred or so “gems" the game gave me upgrading mine after mine, elixir maker after elixir maker. The goal in my mind, at least, was to become a self-sufficient beautiful little fantasy city in the middle of fantasy-land, Fantasy Land. Here it is: 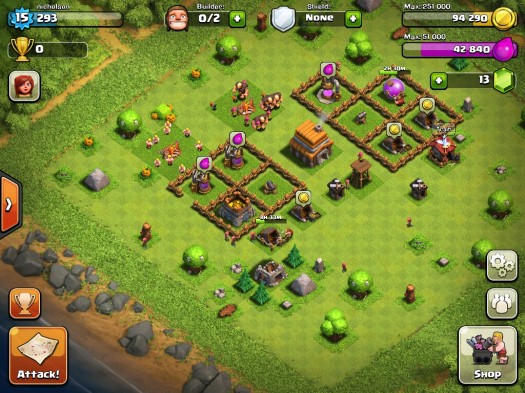 There are three currencies: gold, elixir, and gems. The latter is the control currency. It allows you to rush building and can only be obtained via an in-app purchase or by hitting certain in-game goals. Gold is made mines and is normally used to remove rocks and trees or to fund brand new buildings. Elixir is used for upgrades and, importantly, as the currency you need to build an army.

Being self-sufficient wasn’t good enough after I started raking in cash and built a barracks. Barracks are where you build armies, armies that can be made up of several different kinds of troops including the usual: archers, grunts, bombers, giants. At first, I thought this was justa way to defend my precious supplies. But these dudes are actually used to smash up other people’s or AI bases for profit. Over the course of a couple of days, the idea of all-out war started getting more compelling. I had all this base, all these supply lines figured out. Why couldn’t I just strut into another base and wreck house? I’ve beat the AI to a pulp before, too, so surely players won’t be a problem, right? 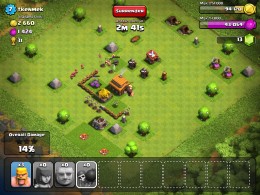 You see, when you attack someone you also open yourself up for P2P, too. Clash gives you tons of defensive options, but it takes time to build the cannons, walls, and towers you need to defend yourself. Plus, there’s the game’s compulsion loop to contend with. Every upgrade you can do or building you can build is checked and balanced. To build a mortar, for instance, you need a Level Something Town Hall. To upgrade your hall, you’ll need to upgrade your cash vaults. To upgrade those vaults, you’ll probably need to do an upgrade or two to your elixir vaults. These are the checks and balances, the hoops, that you’ll need to jump through in order to get that living, breathing war-ready kingdom.

I spent a couple of days speccing towards war. I had been slowly building up walls around my complex, slotting building snugly behind them. I positioned the three defensive weapons I had between these pockets of walls. No-one can get into my gooey middle, I thought.

And so I opened up the P2P tab and attacked a dude. It was a ridiculous victory. I left everything the owner loved in ruins and bounced with a chunk of cash, too. Then, I did it again and again. I started racking up smashing victories. 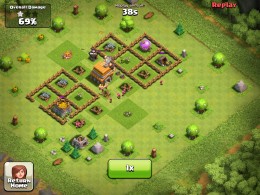 I did this before really think about the ramifications. If someone destroys my base, will it actually just be… gone? The answer is no, I learned after a couple of dudes decided to get a little revenge. When someone wrecks a base, what he does is not what actually happens. If he destroys a town hall, you’ll still have your town hall. What does happen is that you’ll lose gold and elixir points — sometimes, a lot of them.

It’s kinda wild that I’ve even bothered to dig into Clash of Clans “end game." I don’t dig Facebook war titles. The text-adventure approach these things take, and the loose social components, never clicked with me. In light of my experience so far with Clash of Clans, I guess the reason why is that I could never form a relationship with my base in those games. In Clash, you get to actually build everything, upgrade everything, and you get to watch a visualization of your different kinds of troops wrecking stuff. It’s hip.

But what do I do next? I guess I just keep fighting, hoping that I don’t lose everything as other players start pummeling my base. I could also join a guild. There’s certainly a lot of people asking for members in the game’s chat bar, which is prominently displayed on the right-hand side of the game.

I’m not sure what I’ll do. There’s a lot of other games out there that I need to look at. But it’s really interesting that Clash was able to get me to start exploring areas I had zero interest in before I started playing the game. And it does it in a super organic way, without annoying pop-ups or tool tips or any gross kind of methods. Clash‘s flexibility is a strength, for sure. But so is its systemic qualities.