Love it or hate it, OpenFeint was a very important step for iOS devices. Jason Citron and his company basically pioneered bringing something similar to an “Xbox Live experience," for lack of a better way to put it, to the App Store in a big way. Prior to OpenFeint, games might’ve had online leader boards, or multiplayer, but nothing was unified in any way. The first few iterations of the service were a little rough around the edges, but I doubt we’d have Game Center today if it wasn’t for the popularization of services like OpenFeint.

In early 2011, Asian social gaming mega-corp GREE picked up OpenFeint for a cool $104m. Following that, aside from making the original OpenFeint shareholders a nice chunk of change, GREE didn’t really do much with the service other than katamari it into their already existing massive user base. For the last year, OpenFeint has basically stagnated, and with similar services silently shutting their doors it’s not much of a surprise to see GREE axing OpenFeint. 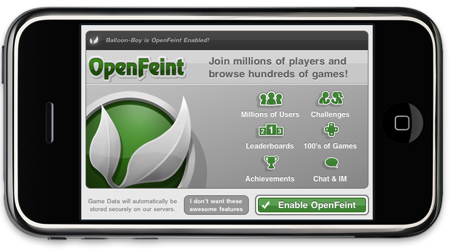 What is surprising is how they’re handling it. Moments ago, developers were given less than a months notice that the service would be shutting down. Keep in mind, that while OpenFeint as it existed may not have been that amazing (especially as Game Center has picked up steam) it worked, and tons of developers have it implemented in legacy iOS titles that leverage the OpenFeint services in one way or another to make (potentially vital) components of their games work.

Developers have until December 14th to migrate away from OpenFeint, at which point it’ll be offline forever. Even under normal circumstances this sort of deadline would be pretty crazy, but it’s especially insane now given the massive influx of developers working around the clock to get their apps and games submitted before the cutoff to have them approved and on the App Store before the iTunes holiday freeze.

Basically, to make this cutoff, developers are going to need to drop everything they’re doing, open up every old project that utilizes OpenFeint and re-code all of those API hooks to either use Game Center or whatever proprietary solution they come up with on their own. Assuming that doesn’t take too long, compiling, uploading, and crossing their respective fingers might result in no downtime for their users.

A more likely outcome of all this, however, is just tons of legacy titles having perpetually broken online components. Because of Apple’s continually updating submission guidelines, even if you rewrite all the OpenFeint code, you’re still going to need to compile against the latest versions of iOS, support widescreen aspect ratios, and a ton of other work that likely is just going to be too much hassle for old and forgotten games that aren’t being downloaded with any regularity anymore.

It’s a bad situation any way you slice it, and while GREE is offering a solution to migrate developers to their new platform, with how they’ve handled the OpenFeint shutdown the general consensus amongst developers on my Twitter feed is that playing ball with GREE is the last thing they’re interested in doing.