If you’re among the many folks (including me) who are eagerly anticipating Modern Combat 4: Zero Hour, Gameloft today has released some new information about the title to whet your appetite. Last month we told you about the official site for the game, Modern-Combat.net, and the development team has been diligently adding new information to it each week since.

Today’s update includes an interview with the narrative designer of Modern Combat 4, and it sounds like Gameloft is really spending a lot of time making sure the single-player campaign and storyline are a huge improvement over previous games, which I’ve always felt have been just “ok." Based on my time with the game in our hands-on preview from earlier this week, I already get the impression that the campaign will be an intense ride all the way through. One of the ways they’re accomplishing this is by actually letting you play as the main antagonist Edward Page for a part of the campaign, letting you see the entire situation from his perspective, and I’m really looking forward to that. 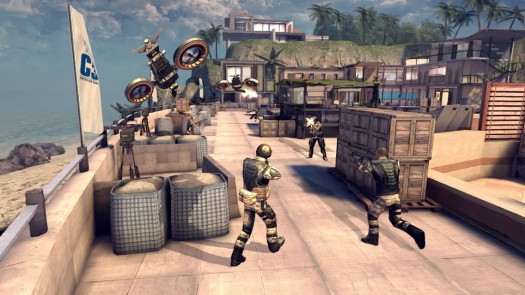 There’s also a new Character Bio for the main protagonist Joel Blake, in addition to the bio released last month for Edward Page who you might remember from Modern Combat 3 ($6.99). According to the interview linked above, you’ll be able to step into the shoes of yet a third character, Sergeant Anderson, who is described as “an ex-phantom member who is now in charge of A.F.T.E.R. (Americas First Tactical Emergency Responders)." I expect we’ll be seeing a bio for this person coming down the pipe soon as well.

Finally, Gameloft has released two very brief videos that showcase two of the planned multiplayer modes in the game. The first is for Battle Mode, which is essentially your typical free-for-all deathmatch game type. Run around and shoot everybody you see… you know the drill. Next is the Team Battle Mode, which is embedded below, and likely you’re familiar with this one as well. All players are split into two teams who then battle it out against each other. These videos are short, but they still look pretty sweet.

If you haven’t yet checked out Modern-Combat.net, then there’s plenty of other cool tidbits of information to check out that have been posted over the last month or so, and there’s all sorts of things that are locked away that should be getting revealed as the release of Modern Combat 4 draws closer. It still sounds like Gameloft will be able to get the game out before the end of the year as planned, and I’m pretty darn excited for it. So are a ton of people in the game’s forum thread, so be sure to drop by there and we’ll let you know when more details or a firm release date for Modern Combat 4: Zero Hour surface.