Gameloft’s Modern Combat series has long been the benchmark for what is possible in bringing a fully “console-like" first-person shooter to the iOS platform. As you’re probably aware, the Modern Combat games take quite a few cues from the modern military-themed Call of Duty console titles, and though that can make them feel a bit uninspired at times, they’re still stellar mobile experiences that offer fairly satisfying single-player campaigns and robust online multiplayer options.

Their latest entry in the series, Modern Combat 4: Zero Hour, continues in the footsteps of its predecessors with an intense single-player campaign and a suite of full-featured multiplayer modes, both with big improvements over previous entries. I was able to sit down for a good solid hour with Modern Combat 4 at Gameloft’s San Francisco office last month, and although things felt rough around the edges, I definitely enjoyed the hell out of my time with this highly-anticipated upcoming title.

If you’ve played other Modern Combat games, you’ll be familiar with the basics of Zero Hour. The default control setup was pretty standard. A floating virtual joystick handles your movement, and dragging on the right side of the screen takes care of aiming. Virtual buttons for firing, crouching, running, and throwing grenades reside along the edges of the screen. There’s also a button for ADS, or aiming down sights, which gives you a slightly more zoomed in and steady aim with your weapon as opposed to when firing from the hip. 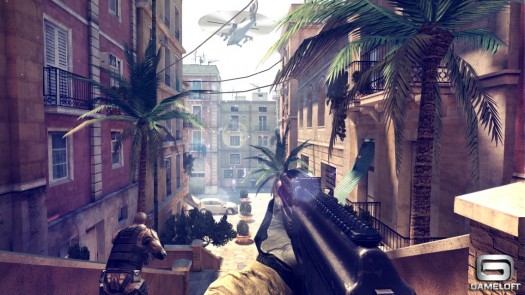 The usual variations of virtual control options should be available when the game ships, too, though I was quite adept with the default setup. There’s also support for gyroscope aiming, though I’ve never been able to get very comfortable with that sort of thing, and I’d imagine support for Gameloft’s sort of strange Duo Gamer controller will be in there as well.

As is typical with games like this, the opening scene of Modern Combat 4 is incredibly intense and wastes no time throwing you right into the thick of things. Reminiscent of storming the beaches at Normandy in the famous scene from ‘Saving Private Ryan’, you and your squad will arrive via boat to the beaches of Hawaii with all manner of hell breaking loose around you. You’ll then follow your squad commander as he leads you inland and through both indoor and outdoor environments picking off enemies as they come. There are various objectives to complete along the way before finally arriving at an extraction point which signals the end of the level.

The gunplay in Modern Combat 4 is satisfying. Enemies displayed intelligence as they utilized cover, split up to try and flank your group, and were generally aware of when it’s a bad time to be out in the open. The combat scenarios still had that kind of mechanical feel which is typical of these games – progress a bit through the level, wipe out a group of baddies, progress a bit further, run into more baddies, and so on – but a smarter enemy AI and the use of the Havok physics engine for enemy death animations creates more of a natural vibe. Enemies will instantly go ragdoll once killed, creating some interesting death animations, and they appear to utilize their skills in different ways each time you play. I ran through the same section of the first mission twice, and it felt different enough each time that it helped eliminate the cookie-cutter feeling that these scripted sort of events can sometimes create.

Another welcome aspect of the game, and one that’s often used in previous Modern Combat games and other similar titles, is breaking up the gunplay in various interesting ways. For example, at one point I encountered a quick-time event where I had to defend a knife attack with swipes. Another time I was able to remotely control a miniature tank as it forged its way ahead of our squad, allowing me to lay waste to as many bad guys as I could using its turret in order to clear the path ahead. Similarly, at one point I hopped in the back of a military jeep and manned its turret, being speedily swept through an on-rails section where I got to – you guessed it – blast away at more bad guys. These sections were fun and definitely offer a nice change of pace from the regular shooting. 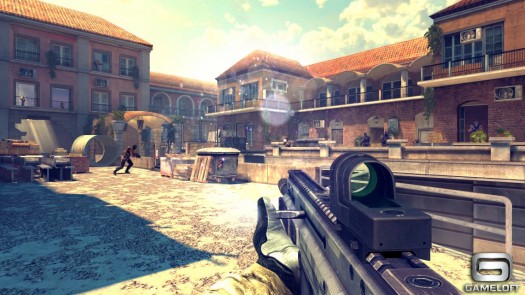 While the Campaign should offer roughly 12 levels and about 10-15 hours of play (it took me a good 45 minutes just to beat the first level), that’s really only half of the package in Modern Combat 4. Gameloft already offers arguably the best online first-person shooter experience on iOS, and they’re looking to improve upon it further. Expanded player classes, the ability to call in more support vehicles and items, and more match types are all in the cards, though sadly I wasn’t able to see any of this in the build I was shown. There will also be 6 slots for different weapon load outs, along with unlockable perks and items to customize your weapons with. This part is actually very cool, giving you a fully 3D model of your weapon that you’re able to rotate around and inspect as you choose where and what you want to change on it directly with a touch.

One sore spot in regards to the online multiplayer in practically all of Gameloft’s games is hacking. There are some bad apples that will go online and use various glitches and hacks to get a leg up in competition, and Gameloft is very aware how this can sour the experience for others. It’s a hard problem to manage, though, but they did assure me that they’re taking additional steps with Modern Combat 4 in terms of how they monitor and deal with this problem from their end, as well as giving players the ability to report abuse themselves from within the game. It’s a constantly evolving problem, and it’ll be interesting to see how well it can be managed this time around.

I mentioned earlier that the game felt rough around the edges, and that was readily apparent with just at a casual glance at the graphics. Jagged edges and blurry textures were everywhere, but I was assured that was normal for the state the game was in and that the visuals would be getting massive improvements before the game actually ships. Don’t get me wrong, it still looked impressive, but those tiny details definitely stood out.

Gameloft wasn’t playing around, though, as the footage below was taken from a newer version of Modern Combat 4 and just like they said it’s a night and day difference from the version I played. You can definitely tell they flipped the switch on all the graphical bells and whistles. A few gameplay glitches and hiccups occurred in my preview build, like sections of a level not loading properly or new events not triggering, and these should be taken care of before Modern Combat 4 hits the App Store as well. However, visually it’s rather breathtaking at this point in its development, and if your’e able to I’d suggest watching this trailer in full screen 1080p, because it looks insane.

I was impressed with my time with Modern Combat 4: Zero Hour, but then again I’ve been impressed with every Modern Combat game on iOS the past 3 years. They really are just remarkable titles for a mobile platform. This new entry feels extremely similar to its older siblings, but with marked improvements in several key areas. Basically, just what a sequel should do. It’s not reinventing the series in any way, but looks to offer another solid single-player campaign to play through and a full-fledged online multiplayer suite that should last gamers for months and possibly years to come, hopefully with less hacking problems.

Gameloft is still planning on launching Modern Combat 4 before the end of the year, and we’ll be sure to let you know when a firm release date has been set. Until that time give our forums a look for further discussion and point your browser to Modern-Combat.net for more information and developer diary videos as the release of the next big iOS first-person shooter draws near.