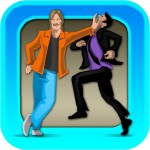 Take Canabalt ($2.99), flip its camera 90 degrees and replace jumping with shoving and that, ladies and germs, is Shove Pro ($1.99). Sorta. That’s it on the most basic element. Shove Pro is perhaps actually engineering a new genre, the parody-action title, and the fact that it also has an airtight plot makes it all the more ludicrious/amazing/shoving.

In Rad Dragon‘s latest, you play as Lars Speedwagon, a stunt actor from a bygone Hollywood era when those chase scenes where the good guy jets down a crowded road and shoves innocent bystanders onto boxes, food trucks, or cars to slow down the authorities. It’s Speedwagon’s calling. He lives to shove. And he’ll stop shoving if the cops get their shove-hating hands on him. Your job is to put off the inevitable for as long as possible.

This is done by intentionally colliding head-on with people on the street, which triggers a bullet-time-like sequence where you can select and drag the innocent sucker’s limbs and indicate what direction and with how much force you’d like to send them careening into the stratosphere with. 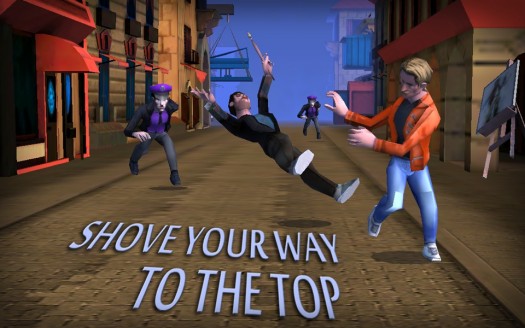 There are some hiccups here: Because you can’t see through your finger, you are basically just guessing and hoping things will go where you want them to. I suppose if it was a 1:1 ratio with dragging and dropping, there would be no challenge whatsoever, but with so much frequent shoving, it feels like you’re being repeatedly reminded of the one bumpy spot in an otherwise very smooth package.

Even when things don’t go where you intend them to, they still might thanks to the chain reactions you can cause. Think of it as a very pared-down version of Burnout: Revenge’s crash mode — where the goal is to string together the biggest disaster as possible. That’s Shove Pro, in a shoving shove-shell.

Other twists pop up along the road the further you progress in each stage, like the requisite “two guys carrying a glass pane" and couples making out (for twice as much shoving). The better you do, the more lira you get, which lets you buy upgrades to add more and more wrinkles. They range from the aesthetic (nightmare mode turns everyone you shove into yourself, other countries offer different backdrops) to the more extreme (special effects turn your shoves into jump kicks, aka “shoving techniques from the Far East").

There’s not a whole ton to this game, but most games in the genre tend not to be known for their complexity. They live and die by how tight their core mechanics work together and how much deceptive depth lies therein. It just so happens this is a game where you can shove a grandmother behind you into an advancing helicopter. And either that’s gonna grab you or it ain’t. And if it doesn’t, hey: Go shove it up your shove-hole (a.k.a. the solar plex-shove).