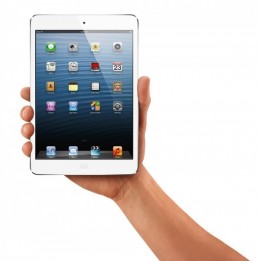 One of the coolest features of iPad mini is its form factor. It’s smaller, thinner, and a lot shorter than a regular iPad, making it more comfortable to grip and easier to stow in a bag. But let’s not get wrapped up and forget its most important feature: its access to thousands and thousands of video games via the App Store.

Turns out that iPad mini is a quite capable gaming device. For you new owners out there, and App Store veterans too, we’ve put together a list of the most awesome games to hit up on your brand new iPad mini. As with all our round-ups, clicking on the price of any game we link will take you directly to the App Store where you can purchase it. We also have reviews available in the text of these blurbs and videos for some on our YouTube channel.

SpellTower Classic, $2.99 – [Review] – [Forum] – Yes, Spelltower is a word game. In fact, it’s still the best one on the App Store. In it, you are tasked with spelling words from a jumble of letters. The bigger the word, the higher your score. Some letter tiles have special powers, such as the ability to take out lines of tiles when used in a word. Your ability to navigate the board, target, and then take out certain letters is what this game is all about.

And did we mention that’s it’s beautiful? This is a gorgeous game that looks just as hip on iPad mini. The size of the device does the game a favor, too, as it’s almost like you are playing a digital puzzle book. Neat stuff.

Spider HD - GameClub, Free – [Review] – [Forum] – One of the absolute App Store classics, Spider: The Secret of Bryce Manor does just about everything right. Use intuitive swipe gestures to navigate a tiny spider around a gigantic mansion, eating the various insects fluttering about by creating webs for them to get caught in. Spider feels like a puzzle game just as much as an adventure, as completing each section requires plenty of forethought and careful execution. However, it’s the fantastic art style and intriguing story elements that will ensure you’ll finish Spider with an incredible sense of satisfaction.

Spider was our 2009 Game of the Year, and it still holds up today. If you have any doubts of picking it up, let me make the decision easy for you: it’s currently free for the next several days, so there’s no reason not to grab it for your shiny new iPad.

Superbrothers: Sword&Sworcery, $3.99 – [Review] – [Forum] – Sword & Sworcery is an experiential puzzle game. In it, you move a 2D avatar around a pixelated world, tapping in any direction. A loose narrative structure guides you to the game’s various oddities, beautiful sounds, mysteries and inspiring landscapes. Unlike a lot of point-and-click adventure games similar to Sworcery, the focus in this game is on the audio-visual experience. It’s powerful stuff, too.

Sworcery is one of those games you really want to spend all day in, and sometimes on the original iPad, that can be hard to do since it’s so big and all. On iPad mini, Sworcery not only looks and plays great, it’s also easier to get sucked into courtesy of its size.

Fruit Ninja HD, $1.99 – [Lite Version] – [Review] – [Forum] – Fruit Ninja is a game that tasks you with slicing fruit. You are the ninja, your finger the sword. With intuitive swipes and taps, you rain oblivion on watermelons, oranges and other delectables. In the process, you rack up huge high scores — but care is required across most of the game’s modes. If you starting hacking up bombs, you risk losing.

This is one of the older games on the App Store, but it’s still great and it translates well to the iPad mini’s smaller screen. Slicing becomes more of a lean-back and relaxed kind of experience, and that suits this game pretty well.

World of Goo, $4.99 – [Review] – [Forum] – Delightfully accessible, yet challenging, World of Goo is a puzzle game that tasks you with assembling balls of stretchy goo into cohesive structures that other unused balls can ride to an endpoint. Each level has a limit on the goo you can use, and eventually the game starts throwing in increasingly odd physics-based elements into the mix as well as new types of goo that perform very specific tasks.

World of Goo on iPad feels like the definitive version of the game. On iPad mini, it’s still just as awesome. But it’s also more intimate. With the original game there was a weird connection that we formed with the game as we assembled the goo with our fingers. Call us crazy, but on iPad mini that bond gets stronger.

AB Classic HD, Free – [Lite Version] – [Review] – [Forum] – Angry Birds is a physics-based puzzle game that tasks you with slinging birds out of a slingshot into makeshift fortress composed of wood and stone. The object isn’t to wreck the structure, though. Rather, it’s to obliterate its occupants: the pigs. The strategy of Angry Birds is in caving in structures so loose material hits the pigs and in using the right birds for the right jobs. Each bird has special wrecking abilities.

Angry Birds has always operated well on smaller tablets and it works well on iPad mini. If you’ve been playing App Store games for a while, chances are you’ve played this one. As a secondary suggestion, give the equally excellent Angry Birds Space (Free) a shot or give Bad Piggies (Free) a spin.

Carcassonne, $4.99 – [Review] – [Forum] – A digital translation of the popular board game, in Carcassonne you and up to five other players place randomly drawn tiles on a board in a rush to assemble fortifications and structures as quickly as possible. You’re awarded points when you place one of your limited person-like token on a tile that was played. Points are modified by the size and scale of the structure. Longer roads, for example, give you more points. So do completed cities.

Don’t let the whole board game thing scare you off; this game is masterfully built and fairly accessible considering its somewhat complex mechanics. On iPad, this game is great. On iPad mini, it definitely continues to rock since it’s much easier to pass and play with the smaller tablet.

Rayman Jungle Run, $2.99 – [Review] – [Forum] – Rayman Jungle Run is a 2D, side-scrolling endless running game. What that means is that you don’t control the avatar’s horizontal movement — it just automatically moves to the left. You’re actually just tasked with the real meat of moving around in the game world: the climbing, the jumping and the popping of special abilities, like wall jumps and kick attacks, when necessary. The genius of these games is in the pure fundamentals of level design. Your agency is limited, so where you can take some, it’s gotta be entertaining.

And it is entertaining. Rayman Jungle Run manages to feel interesting thanks to the way action segment are designed and goals — the collection of shiny objects — are laid out. On any platform, this game pops, and it does so on iPad mini, too.

Bumpy Road, $2.99 – [Review] – [Forum] – A curious physics-based game that tasks you with “bumping" a road to move along a car to an endpoint, Bumpy Road is one of the more unique titles to grace an iOS touchscreen. The bumping mechanic is cool: the road literally changes its shape depending on the way you tap it, so you’re literally forming hills and valleys to keep the car rolling. As you play, you’ll also be able to collect memories of the couple in the car you’re bumping, which is a fantastic touch.

Bright, colorful, simple, and somewhat mysterious, Bumpy Road is one of those games we tell people to download whenever they get a new device, whatever it may be. It’s built perfectly for touch and has a lot to share as an artistic thing. Check it out.

Tiny Wings HD, $2.99 – [Review] – [Forum] – Tiny Wings is about momentum. In the game, you control a tiny bird and roll it down big hills so it can temporarily take flight. This is all done with touches and swipes. The over-arching goal of the game is to move the bird along as fast as possible; there are several islands to explore, but you only get a limited time to make it to each as when the sun sets, the bird immediately goes to sleep.

New updates continue to make Tiny Wings a better game. We don’t anticipate one for iPad mini specifically, but the game looks and plays awesome on the device. In fact, this is now the platform we love the best for the simple, yet amazing game.

We write about a lot of video games on TouchArcade. In fact, that’s all we do. If you’re a new reader, consider this a welcome of sorts. Stick around. We cover all the latest in iPad, iPhone, and iPod touch gaming on a regular basis and do our best to help you find the next game that will make undoubtedly make you late for something important.

Over the next few weeks, we’ll definitely have more to share on iPad mini specifically, including any potential announcements of device-specific games and such. This thing is a cool tablet and it’s definitely a platform we’re going to stick with.