When you see a game with a name as nondescript as Angry Birds [App Store], it’s pretty hard to get excited. Even after playing through the first few levels, I was enjoying this game, but failing to see the real appeal. Sticking with Angry Birds for more than 30 minutes, however, reveals a game that can easily be compared (both by the design and quality) to the Wii’s family-friendly hit, Boom Blox, and turns out to be a lot of fun.

Angry Birds is a game that doesn’t even pretend to have a story, and I really appreciate that. The full intro to the game is a single picture which illustrates some green pigs stealing eggs from a variety of birds. Naturally, the only way for the birds to vindicate this atrocity is to launch themselves from a slingshot in a suicidal attempt to take the lives of as many pigs as possible. I like to think that because the pigs are green this is some sort of swine-flu revenge fantasy, but it’s likely that there’s zero credence to that idea. 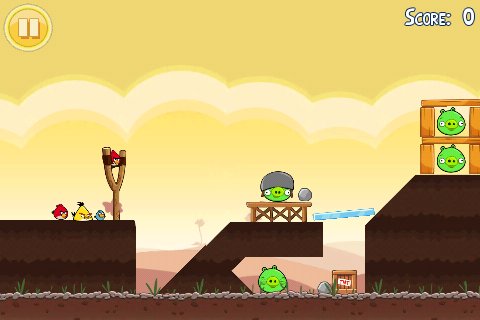 With all of that out of the way, players are haphazardly tossed into a level in which several angry-looking red birds are gathered around a primitive slingshot, with a small wooden tower harboring a little green pig to the right. Touching and dragging backwards on the bird that is currently mounted in the slingshot will prime your disturbed little critter for launch. From here, your goal is to aim your shot effectively and take out a weak point on the pig’s tower, causing him to fall to his little piggy doom. 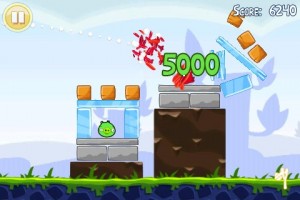 As the game progresses, you’ll be given access to different types of birds that each have a unique power which can be activated by tapping the screen while the bird is mid-flight. Blue birds will split into three separate birds, yellow birds will get a large speed boost, black birds explode, and white birds drop explosive eggs.

Angry Birds will hand you preset numbers and types of birds in each level, so strategy becomes key as you find yourself trying to figure out how each of your birds can work cooperatively to cause some Rube Goldberg-worthy destruction. Over the course of the 63 levels in the game the challenges will become more difficult, yet simultaneously more rewarding upon completion.

There isn’t much in the way of extras in Angry Birds. While developers Rovio have promised Leaderboard support in a future update, for now the only thing to do in the game is play those 63 levels. There is no tutorial, no multiplayer, no challenge mode, and no other features that are common in other titles.

There is, however, some good motivation to go back and improve scores on previous levels due to the rating system for each level in the game, and Rovio has announced in our forums that they will be holding a fun little contest to see who can get a the highest possible rating on all 63 levels (with the prize being a free Angry Birds poster hand-signed by all the developers).

Angry Birds might not have a lot of extra features besides its single player mode, but to be honest, that mode alone makes the game a fantastic value. Angry Birds successfully captures the spirit of Boom Blox using a 2D viewpoint, a compliment that should make this game an automatic purchase for many.