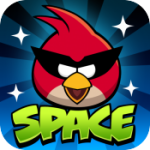 Let’s wind the clocks back to 2009, as really, to appreciate what Angry Birds has become, I think we need to go back and appreciate what Angry Birds was. The App Store was a crazy place. The “gold rush" was still in full effect. Publishers like Chillingo were trying to stake as large of a claim as possible in this brave new world brought about by the impulse-powered instant gratification of downloading a 99¢ game and the exploding popularity of the iPhone.

Chillingo was incredibly successful in pooling together a library of games we called “AAA titles" at the time. iDracula ($2.99) may look incredibly archaic by today’s standards, but back then, it was among the cream of the crop. In late May, Chillingo spun off a new brand called Clickgamer.com, which per the original press release was intended to “carry casual games and software applications in the Apple App Store. This new brand will fully complement Chillingo’s existing catalogue of AAA innovative titles." 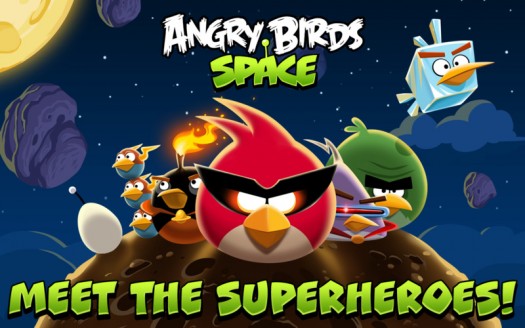 Clickgamer.com’s aisle in the App Store was (and still is) an odd assortment of ultra-casual games and apps ranging from the SAT Vocabulary Builder to sliding block puzzle games like Pic n’ Mix ($0.99). Reading between the lines of Chillingo’s own distinction between the AAA Chillingo and Clickgamer.com brands, it wasn’t difficult to see why Angry Birds (Free) was relegated to the non-AAA Clickgamer.com brand when it launched, as the late-2009 1.0 version of the game really wasn’t anything that special. Or, as we mention in our original review which almost seems laughable now:

When you see a game with a name as nondescript as Angry Birds, it’s pretty hard to get excited. Even after playing through the first few levels, I was enjoying this game, but failing to see the real appeal.

The original release had a barebones array of birds, 63 levels, no leaderboards, no achievements, and no, really… anything else. Angry Birds wouldn’t even strike it big until months later in early 2010, when Chillingo announced that the game had been downloaded over half a million times. Whether that sales surge was a result of Chillingo’s marketing prowess or creative consulting as a publisher or the product of Rovio’s hard work seems to be a matter of perspective, and the answer to that question depends more on who you ask. Regardless, Angry Birds has yet to let go of a position on the top ten iTunes sales charts. 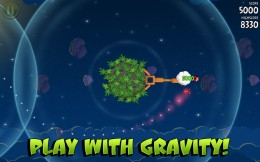 The Angry Birds kingdom expanded into the Angry Birds empire with the self-published release of both Angry Birds Seasons (Free) and Angry Birds Rio (Free) over the next couple of years. Since then, Rovio has grown further yet, and now days it’s difficult to find a platform that doesn’t have Angry Birds on it as the brand has made its way to the browser, smart TV’s, and even feature phones being sold in emerging markets. Think about that. People in African countries rocking series 40 Nokia phones have Angry Birds.

Despite Rovio’s unprecedented levels of success, recently it has been hard to dispute the argument that the Angry Birds formula might be getting a little stale. I’ve always been excited to play through the levels added in new updates, but for a while now I’ve felt like I’m just going through the motions of figuring out the weak points in the pig defenses, launching a bird, collecting my three stars, and moving on. This lead to the inevitable question of what could Rovio do in a sequel to not only revitalize the brand to players who have grown bored, but also provide a big enough twist on gameplay to make it worth having a fourth installment in the series?

It turns out the answer was to head to space.

Angry Birds Space (Free) is close enough to the rest of the Angry Birds family that anyone even vaguely familiar with the games will be able to hop right in. It features the same premise of flinging birds in a big slingshot into dastardly egg-stealing pigs, but this time, your shots are assisted by a dotted line coming off the front of the slingshot to make the aiming process a little more transparent. The boss battles from Rio even make an appearance.

It comes packed with the familiar family of birds, with some minor modifications. All of the birds got a cosmetic upgrade, with snazzy looking space outfits. More importantly, some of their functionality has changed. For instance, the new version of the yellow bird doesn’t just dash forward. Instead, tapping on the screen sends it homing in on that specific location, even allowing for complete trajectory changes in flight. The force exerted by the bomb bird seems to focus more on pushing things rather than destroying them, and a new freezing bird turns anything inside of its blast radius into ice, allowing for easy cleanup with blue birds.

The magic of Angry Birds Space comes from the physics tricks Rovio is able to pull off by leaning on the gravitational fields of the various planetoids that make up many of the levels. Birds shot into space fly straight as an arrow, as obviously, there isn’t any gravity to make them do anything differently. Gravity fields are indicated by faint blue halos, and completing each level (particularly with three stars) involves the intelligent mastery of both zero gravity as well as the (potentially) multiple gravitational pulls of the different planetoids that the pigs have set their forts up on.

This varying gravity system allows for some incredibly elaborate level design, including puzzle elements that would never have been possible with the “traditional" gravity model of previous Angry Birds titles. One early level that exhibits this in a particularly clever way involves the introduction of the bomb bird. Players are faced with a bunch of pigs hanging out and being smug on a gravity-rich planetoid. 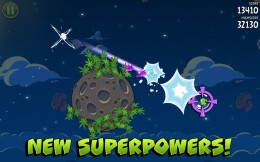 There isn’t a clear shot to be had between the slingshot and the pigs themselves, as there are all sorts of asteroids littering the top half of the screen. Completing the level actually requires delicate use of the bomb birds to gently push the asteroids down into the gravity field, at which point they come smashing down on the pigs. Other levels involve shooting your birds to catch the rim of a gravity field, placing them in an orbit of sorts to slingshot around to hit an otherwise unreachable target.

The truly interesting thing that I’ve found is that this gravity mechanic has allowed for some incredibly creative ways to complete levels. The comparison may be a bit of a stretch, but in Scribblenauts Remix ($0.99) the way to truly have fun in that game was to come up with the most absurd and imaginative solution to each puzzle. Sure, nearly every level can be solved by equipping yourself with some wings and a gun, but there’s just a certain sense of satisfaction to be had when you figured out how to somehow work Cthulhu into your solution. Similarly, while most levels in Angry Birds Space often have a fairly clear-cut solution, I’ve been having way more fun coming up with the most convoluted flight paths for my birds, with personal bonus points awarded for as many orbits as possible before expertly slamming whatever bird I fired into a pig.

Some other changes have been made to Angry Birds Space, namely, the addition of a new in-app purchase system. In previous games, the Mighty Eagle is a one time 99¢ purchase which allows you to skip one level every hour. The Mighty Eagle also adds an entirely new (although not necessarily immediately apparent) game mode where you can go back to previously completed levels and fire off the Mighty Eagle shooting for destroying everything on screen. 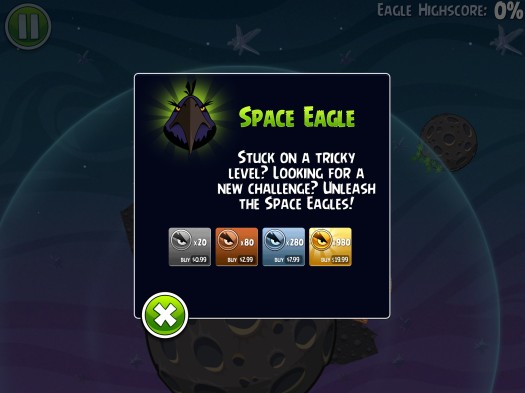 Unfortunately, now not only is the Mighty Eagle a consumable item, but it also doesn’t automatically skip a level. When you fire out the sardine can, the Mighty Eagle can totally miss, leaving whatever smug pigs are left on screen laughing at your failure. Additional Mighty Eagles are awarded in small quantities by just playing the game. Alternatively, 20 Mighty Eagle shots can be purchased for 99¢, with additional packs of Mighty Eagles ranging all the way up to 980 for $19.99.

Out the gate, Angry Birds Space comes loaded with two level packs: “Pig Bang" which serves as more of a tutorial for the new space-centric physics and “Cold Cuts" which introduces the new freezing bird. A third (very difficult) level pack entitled “Danger Zone" is available via a 99¢ unlock, and if you even find yourself vaguely enjoying the two included packs, the third one is basically required.

This raises the question of what is going to come of the future of Angry Birds updates, as the tea leaves of this IAP-unlocked level pack can be read in numerous ways. Angry Birds has been known by its seemingly never-ending stream of free content via updates, and I find it to be a little hard to believe that Rovio would put a stop to that with Angry Birds Space. My gut is telling me that future updates might follow a path of offering up a free pack and an optional ultra-difficult paid pack like “Danger Zone" for hardcore players… But, we’ll have to wait for the first update to land to know for sure.

If you’re playing on a new iPad, you’ll be happy to know that the HD variety of Angry Birds Space comes with crisp Retina Display-friendly graphics. Neither the HD or standard versions are universal, so, having the optimal Angry Birds Space experience requires some App Store double dipping if you want to play on both your iPhone and iPad. Sadly, there still doesn’t seem to be any way to sync progress between versions of the game, so, in that regard, there isn’t much point in buying it twice anyway.

Angry Birds is the unlikely candidate with meager beginnings that somehow managed to redefine both mobile gaming and the levels of financial success that are possible in the mobile space. The brand is known worldwide, and the series is enjoyed by everyone from hardcore gamers, to celebrities and athletes, to my own father who couldn’t possibly be more of a non-gamer. Angry Birds is the Super Mario Brothers of mobile devices, and Angry Birds Space is so successful in redefining the Angry Birds formula that everyone should give it a try.