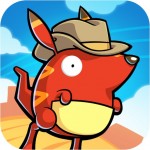 Everyone was curious what 5th Cell’s follow-up title would be after bringing Scribblenauts Remix ($0.99) to the App Store, and it turned out to be a game called Run Roo Run ($0.99). It’s a platformer of sorts with a very heavy emphasis on timing. Let your little Roo loose in a level, then simply tap the screen to jump or interact with items at the exact right moments to get past any objects or hazards.

It’s a game that we really liked in our review, and just this week Run Roo Run was updated with Universal iPad support and currently the price has dropped to free to celebrate.

It’s pretty darn simple to play, but in the later levels things can get downright tricky, and will require pinpoint precision on your part. Speaking of levels, Run Roo Run has literally hundreds of them, so it should keep you busy for a good long while.

If you already own the iPhone version of Run Roo Run, then grab this Universal update and throw this bad boy on your iPad (if you have one, that is). If you are an owner of the iPad-native version Run Roo Run HD ($1.99), you should probably grab this new Universal version anyway since it’s free, so you’ll always have the advantage of putting it on an iPhone or iPod touch.

The bottom line, though, is that Run Roo Run is a pretty fantastic game, and you should definitely grab it one way or the other while it’s free.