5th Cell’s and Iron Galaxy Studios’ Scribblenauts Remix [$4.99] is a work of utter genius. Think of a noun, type it in, and then the game conjures whatever you chose to aid you in a puzzle. Need to find a way to reach a button on a cliff above the sliding door it controls? Hop on a pegasus. Want to bury a dead man? A stylish coffin, a shovel, and a spot of dirt will do the trick. Remix’s brilliance is in its ability to let you use any tool to solve any puzzle. It cradles creativity unlike any other game, and Remix isn’t shy about letting you play in its world, to create all the fire-breathing dragons or toasters you can handle.

If you said Remix is a Best Of port of Super Scribblenauts and Scribblenauts, you wouldn’t be wrong. Remix is the sum of those core experiences with added touch controls that can, in some instances, feel inorganic. It strikes me as more of an upgrade, though. The game engine has a noticeably sharper look and feel, extraneous movements and navigation elements have been stripped or streamlined, the play is generally snappier, and some new levels have been thrown in for good measure. While 5th Cell didn’t re-invent the wheel with Remix, it did bother with the balance, weight, and treads on the thing. 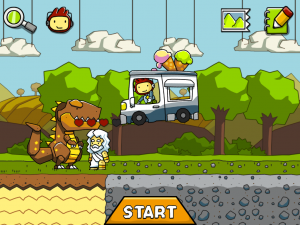 The setup goes like this: you, as a curious boy named Max, are thrown into dozens and dozens of puzzles or challenges that all revolve you satisfying certain objectives with nouns or the use of adjective and nouns. The progression is incoherent — in one level you’ll tune a race car, in others you’ll carry around a dead man, set up a school for the first day of class, or hide a lion in front of a magic show’s audience. The constant is the gleaming Starite, which is your reward for fulfilling all what is required.

The majority of scenarios aren’t really the hotbed of creativity that I’d love for them to be. Sure, you could conjure a winged dragon or a vampire in the school house level, but what the game is going to credit you for are the basics: chairs, desks, podiums, and all of that rather dull school-y stuff. There are some significantly more open experiences to be had. The first level, for example, simply charges you with sniffing out the actual Starite in a tree filled with impostors. I used a flamethrower against the tree to burn everything out of it because I’m a jerk, but it totally worked. 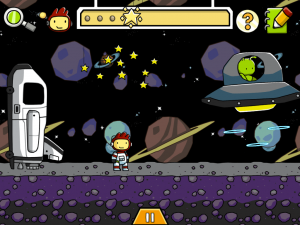 I can go either way with the duller scenarios. Most of the time, I use them as extra encouragement to think outside the box. Sure, I could give the hairdresser scissors, but wouldn’t it be a funnier if I gave her an exceedingly more creative object to snip her client’s hair? Some of the more open levels, on the other hand, do require critical thought. Creating a mass extinction event without asteroids is harder than you think. If you ever get stumped, the game does a decent job with its hint system giving you all the teases you need to succeed while still not robbing you of those glorious “A-Ha!” moments.

Like in other Scribblenauts titles, you’ll need to do a measure or two of moving, probably most often to mount that flying dragon you just created. The touch controls function well for the most part. A simple tap to the levels borders steers Max, while shakes remove everything you created and two-finger swipes allow you to look at the map. Actions like jumping and climbing are automated to maximize your leisure and sharp radial menus handle all the “remove or give object” kind of functionality. The iPad’s regular virtual keyboard is your magical conduit to the game and noun creation. 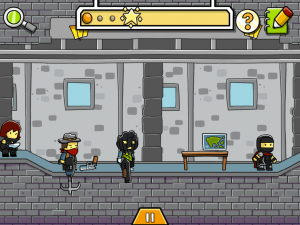 Probably the best thing about Remix is that movement is important; it’s the creation. And what you can do almost magical. Want to watch God fight a T-Rex? Make it happen. Want to see what happens when you throw a caveman or a toaster into a pond with a shark inside of it? Go ahead. The casual disregard of the actual objectives is actually an empowering side-mechanic that really, somehow and someway, allows you to experiment and conjure alternative solutions to the fairly simple problems the game might throw your way.

The introduction of adjectives and the adjective-leaning puzzle levels really flesh out the experimental play. In one level, for example, you’ll be asked to make a man into a dragon with some mad genius potions. Thinking of which attributes you think are important to dragons and then applying them to potions is nothing short of entertaining, just like the game’s open and sandbox-y world. If you want to do it, you probably can. It’s insane and great all at the same time. It’s indescribably fantastic to wield so much power.

It’s pretty cliche to write in a game review, but I really think you’d be doing yourself a disservice by not checking out Remix. It’s an utterly fascinating game that isn’t afraid to put significant power in your hands. It utterly embraces creativity and brims with extremely satisfying moments and stories to share as a result.

Publisher WBIE could have easily had this phoned in and still made stupid amounts of money, but it didn’t; this is a rock-solid pseudo-port that plays extremely well on mobile and displays a measure of technical and mechanical grace none of us expected it to. Oh, and it’s Universal and supports iCloud saves across devices — icing on the cake, folks.