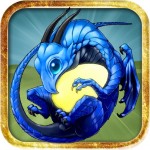 Dragon Island Blue ($0.99) is weird. It’s not perfect, something that Brad and Eli made amply clear in our TA Plays video of the game, but it’s not a complete cop-out either. In fact, if you’re the sort who has spent any amount of time obsessed with Pokemon or Digimon or any of the many other monster-training games out there, chances are you’ll find it hard to dislike Dragon Island Blue.

Of course, as is often the case, there’s always a caveat. Do you like anime? If not, you’re probably going to wince at the art style because it’s a decidedly Japanese-looking title that we’ve got here. However, if this sort of aesthetic does appeal to you, the game actually doesn’t look half-shabby. The dungeon sequences are the only places where the visuals genuinely falter, a crying shame given the fact you’ll be spending a fair amount of time rummaging through subterranean labyrinths and haunted manors.

Nonetheless, the core product works and it works well. As a fledgling monster trainer, it’s your duty to be the very best, figure out exactly what’s going on with your absent father and find out why dragons have suddenly returned to your world. Given that this is a Pokemon-esque game, you can sort of guess which of these goals will take priority. Yup. The monster-catching. 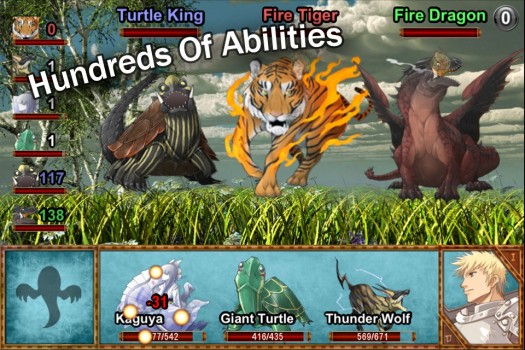 Your father and the rest of the world can totally take care of themselves. There are over two hundred monsters to beat down, catch, beat down, evolve and sacrifice in the name of acquiring precious soul gems (There are even spirit totem things to bend to your nefarious will.) Each of these critters also come in four different flavors: earth, wind, fire and water. As you might have gathered, you’re probably going to want to make use of these elemental variances in your fights to ensure maximum efficiency.

Speaking of the fights, the battle system is turn-based in nature. At any given time, you’ll get up to six creatures going up against one another. Should there be more in reserve, the additional creature will automatically swap in if any belonging to the original line-up fall to their opponents. Curiously, you won’t have any in-battle control of who joins the fray. The order your monsters will appear in can only be modified in towns. Why? I don’t know, but it’s a frustrating wrinkle to the gameplay. 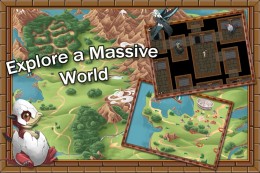 Controls-wise, they’re what you may have expected of a game like this. To choose an attack, you simply need to click on the appropriate icon or perform the corresponding swipe gesture. Your monster will take it from there. Take note, however, it’s also very much necessary to pay attention to the turn order; failure to do may result in an abrupt return to the nearest town.

It’s an interesting move by the developers. While most games take it upon themselves to punish you severely for your failure, Dragon Island Blue is considerably more relaxed. Did you fail to beat up a boss monster? That’s fine. You can come back and try again. No worries. While the lack of a heavy penalty might put off more hardcore fans, it’s still a nice feature for those who habitually forget to save.

If the idea of managing a monster menagerie isn’t enough for you, there are a fair number of quests to engage in. These will primarily originate from the Guilds located in every city and can range from things like ‘Defeat X creature at Y place’ to ‘Catch X monster’ and even ‘Make X critter’. Dungeons often come with objectives of your own. As far as I can tell, whenever you enter a dungeon, you’ll be told to find and capture up to three of its denizens to secure a reward. It’s hardly an essential part of the game but the supplementary goals are nice.

You’ll also be able to improve your breeder license (this will entail you surviving a round in the arena), level up your character himself, add points to the somewhat elementary stat system and more.

To abuse a very familiar adage, ‘personal mileage will vary here’. I liked Dragon Island Blue enough to forgive its imperfections, but you may not. Nonetheless, while it doesn’t exactly innovate on the genre, it’s still something I find myself coming back to, forever intent on nudging my menagerie over the next performance plateau.