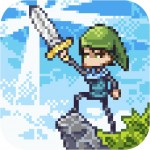 Late last week Everplay’s enjoyable arena platformer Spell Sword ($0.99) received a substantial content update and transitioned into a free-to-play model. New content is always welcome when it adds even more good stuff to an already great game, and this update is no exception.

A brand new arena called Sky Temple has been added along with 60 new mission levels. There are more than 30 new shop items, new Spell Cards, and new enemies. We also get iCloud game syncing as part of this package, which is always a nice feature for Universal games.

The switch to a free-to-play model is the part of this update that scared me, as it can be a touchy subject when developers change a game that many have previously paid for. However, it’s really not such a bad deal in Spell Sword. The only thing that seems to have changed is the ability to purchase the Rupee and Dragon Coin currencies with real money via IAP. Basically, everything else is just as it was before.

You might remember, the lack of any IAP in Spell Sword was something we appreciated in our original review. But, if you don’t want to pay anything you’ll still earn the currencies at a fair rate through normal play, and if you’re feeling impatient the option to purchase is there. The best thing about this is that the barrier of entry to try out Spell Sword is now zero, and it really is a good game that everyone should try.

Go grab the latest update and check out all the new content, and if you’ve been hesitant about trying Spell Sword now is the perfect time since it looks like it will be free permanently from now on.