If there’s anything that could completely wreck my plans and productivity, it would be a Super Crate Box [$1.99] RPG. I’d say a quick prayer of thanks to Vlambeer for not going forward with that idea, but it’s too late. FireFruitForge and Everplay Interactive have something against letting me work in peace, I guess, because Spellsword [$0.99] is that perfect storm of quick, one-more-try gameplay and RPG mechanics I can completely lose myself in.

Spellsword isn’t a clone of Super Crate Box (thankfully—Vlambeer really could use a break), but it has a similar starting point. It’s an arena game that’s designed around rapidly collecting weapon spawns to kill baddies. But where Super Crate Box focuses tightly on that mechanic to the exclusion of everything else, Spellsword takes a more expansive road. Along that road you’re going to find levelling, loot, and a lot of new ways to play.

As a result, it’s not quite as clean as Super Crate Box’s more minimalistic approach allows. It has a few problems, and things get sloppy from time to time. I’m not saying you shouldn’t play it, though. It’s crazy-fun, and you really shouldn’t miss out. 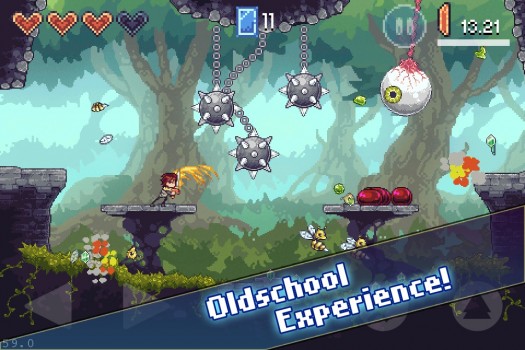 You start out as a quippy hero with a spellsword. It’s not worth much on its own, but it can be enhanced with cards that litter the arena. Each one powers up the sword in some way—with fire, ice or poison damage, for starters—and each one also sets off some sort of effect. The ice card sends out wheels of ice, the fire card launches fireballs, and the poison card poisons every enemy on screen. And that’s just the start. 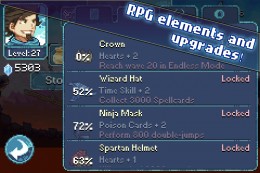 So while you can certainly run around killing things with your sword, it’s dangerous. Better to collect every card you can, and lean on those one-time effects to do the killing for you. This is where the game feels most like Super Crate Box, dodging enemies to get to the next card and never stopping to rest. Still, the differences are pretty huge.

For one thing, enemies drop rupees. In fact, the whole game is pretty much built around the rupee economy. Play well to earn more rupees, which you can use to level up your cards, your sword, and even your rupee drop rate. You can also use them to buy gear that adds to those same skills. And before you ask, no—there isn’t any IAP.

Mission mode is another big difference. Each of the three current arenas come with 20 missions. These ask you to do a bunch of different things. You might need to survive some waves, kill some baddies or collect some cards. In exchange you’re given big payouts of rupees, new cards and the occasional piece of gear. 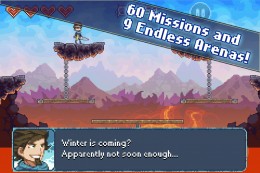 Endless mode is more familiar, with nonstop waves of baddies until you burn through all your hearts. There are three difficulty tiers of endless mode for each arena. In them you’ll grind rupees, and you’ll also find the leaderboard competition.

When it comes to the little things, Spellsword goes the distance. The look is great, very much like Terra Noctis [$0.99], FireFruitForge’s other big title. The sound is no slouch, but it doesn’t really stand out. Love it or hate it, the real flavor rests in the hero’s quips. There’s one for every mission, and nearly ever single one is a reference to a show, game, or movie. They run the gamut from modern and obvious to old and seriously obscure. Me, I find ’em charming.

As I mentioned, there are also some problems. The controls aren’t great, and on iPad they’re worse. There’s already a fix incoming for that—along with adding new control types, it will let you reposition the iPad controls. There’s also some clumsiness in the arena design. It’s easy to get caught on edges, or mess up platforms. There are also ways to abuse positioning and let enemies wander off to their own deaths. These things aren’t remotely dealbreakers, but they can be irritating.

Overall, though, the game is outstanding. The RPG mechanics add a whole new layer of compulsion to an already inviting sort of game. It’s not easy to call it quits, especially when there’s one more level to earn, or one more piece of gear you can almost afford. Those things make it less of a pure skill game—you’ll need to put in a bit of a grind to cap out— but they also add a bit of strategy. There is real value in carefully choosing your gear and putting your rupees to good use when leveling.

With some elbow grease and a good once over, Spellsword could easily earn a permanent spot on my iPhone. It’s really that good. And Everplay Interactive seems dedicated to hitting those heights, if the developer’s comments in our discussion thread are anything to go by. I don’t see how you could possibly go wrong here. This a game that’s fun, full-featured and ridiculously cheap, with a developer that’s working hard to keep fixes and content coming. Looks like a winner from here.