If you’ve ever wondered what it would be like to forge through a post-apocalyptic environment filled with zombies, disease, human scum and an abominable amount of bad luck, an environment that is Murphy’s Law incarnate, Organ Trail: Director’s Cut ($2.99) is the game for you. A brutish zombie survival title, Organ Trail will kill you so many times that you’re going to start thinking that South Park’s Kenny had it easy.

On the off-chance you’re a little too young to remember the original, Organ Trail: Director’s Cut draws heavy inspiration from an Apple II game called Oregon Trail, an educational piece designed to teach kids about the life of a 19th century pioneer. Needless to say, that game also involved people going splat (or squelch or, well, whatever).

But, back to Organ Trail. After being saved by a short-lived priest (In one of my playthroughs, he somehow succeeds in breaking his arm, contracting dysentery and getting bitten by a zombie all in the span of a minute), you find yourself on the road with four friends. There’s apparently a ghoul-free future waiting for you somewhere in the West and, because you’re kind of short on viable alternatives, you make it your collective goal to get there. 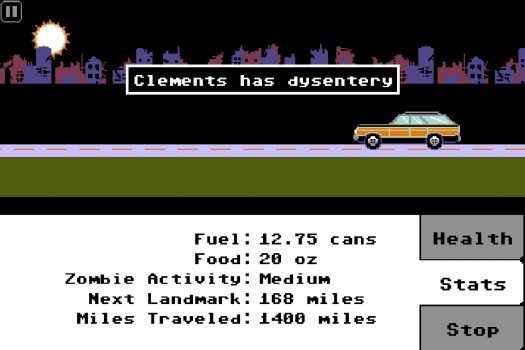 As you might have guessed already, from all the mention of doom and destruction, this isn’t going to be easy. In fact, a better description of things would be ‘nigh impossible’. Curiously enough, however, it’s not the zombies that make it difficult. If you have sufficient ammo, a decent aim and adequate amounts of medkits, they’re more of a semi-tolerable nuisance than anything else. No, it’s your supplies. They’re going to be the biggest issue here. Why? Because there will never ever be enough. 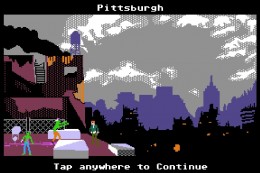 In total, there are nine categories of supplies to worry about: fuel, scrap, food, medkits, ammo, tires, batteries, mufflers and money. While some are slightly more important than others, they’re all going to be essential to your long-term health. At the start of the game, you’ll get a chance to decide on what your initial stash will be like. Later, however, you’re going to be dependent on what you’ll find on the road and how well you survive the random events that will continuously rob you of your store.

There are a few ways to gather material. First and foremost, you can scavenge. This is accomplished through a mini game of sorts. Both zombies and supplies will randomly appear on your screen. To collect supplies, you simply need to tap on the screen and move your avatar over them. To kill the zombies, you’ll need to, well, shoot them. Bludgeoning is not an option here. (Shooting is accomplished by drawing a line from your character and then aiming in the direction of the undead before releasing the shot.) 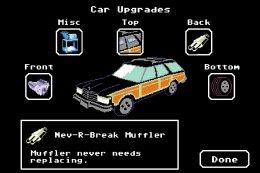 You can also choose to take up odd jobs whenever you’re in a settlement. If you succeed in the subsequent mini game (these all involve shooting things), you’ll then be rewarded with whatever was initially promised. If you don’t, you’ll have to leave empty-handed (or worse). Of course, if you’re a terrible shot, there’s always the last two alternatives – blind luck and trading. From time to time, random events that give you free stuff will crop up. Trading is slightly more reliable. Slightly. I once spent four hours attempting to find someone who would trade me batteries for food. It didn’t work.

Because Organ Trail is a hardcore zombie survival simulator, there’s also always going to be the fear of zombie bites lingering over your head. A bite can mean a friend turning into a zombie which, in turn, can mean an end to your adventure. Fortunately, you’ll be able to put down your friends if you so choose. Heck, you could put them down to save on rations too. You don’t really need them, do you?

Managing the actual trip itself isn’t particularly difficult. You won’t actually have to drive the car, it’s perfectly capable of slogging along on its own. Occasionally, you may want to stop to repair the car, rest, scavenge, re-adjust your pace, change ration sizes and more — all things that you’ll accomplish with a tap of a button and sufficient supplies. I’ve only managed to make it down to the fifth town but, judging from the hands-on preview we did of the game before, zombie mutant bears, hostage situations and shoot-outs are very real things here.

Organ Trail: Director’s Cut is a weird, wonderful and almost surprisingly expansive experience that will both infuriate and enchant. It’s built for the masochist, for the nostalgic (the 16-bit presentation is a royal treat), for those who don’t have a problem dealing with Lady Luck’s wicked sense of humor because, more often than not, you will lose the game and it will not be your fault at all. More than anything, Organ Trail: Director’s Cut proves that a tongue-in-cheek nod towards the original and an overdone theme can, indeed, be fun. (In a sick, sadistic sort of way.)