It’s been days or maybe months or even years since people started undying and the bombs started dropping. The dead are walking. The Great Plains are a nuclear wasteland. Scavenging is a way of life. People are pretty jumpy.

The world has gone to crap, but there’s a sliver of hope on survivors’ minds. Word is, out west, there’s a safe place. A place where there’s a cure for the zombie virus and you don’t need to fight to stay alive. Problem is getting there. You’re in Washington DC, and you’ve just had to kill your experienced traveling partner because he started thinking that brains taste better than Doritos.

Without him, you and four of your friends are going to try to make it to Safe Haven with the limited amount of supplies you’ve gathered so far. The journey isn’t going to be easy. Sure, you’ll be able to scavenge for food, ammo, fuel, and cash along the way, but living, breathing people tend to break down. They can get sick with cholera or dysentery. They might break a leg. Heck, they might even get bit. 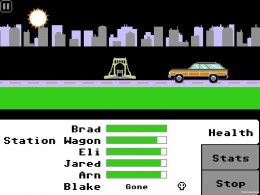 This is the setup for The Men Who Wear Many Hats‘ Organ Trail, a tongue-in-cheek take on MECC‘s glorious Apple II game Oregon Trail. It’s a survival simulator that uses several, if not all, of Oregon Trail‘s mechanics. Most glaringly, most of the action in the game occurs on a traveling screen that spits out text prompts that detail the latest horrible thing to happen to you or your friends. When you’re not too busy being disappointed with the latest broken arm or cholera outbreak in your station wagon, you can stop and enter into a hunting mini-game. When you hit landmarks, you can buy and trade with the locals, as well as get the latest word from strangers about the wilds.

It’s this close because of love. Sort of. The Hats’ Ryan Wiemeyer explains. “The idea came about when we were just spouting out ideas and seeing what stuck. We quickly realized that the zombie apocalypse went really well with the mechanics of traveling somewhere and dying slowly."

“There are so many great parallels. Keeping your friends alive, hunting or scavenging for food, diseases, trying to make it to pockets of civilization, etc."

From Flash to iPad 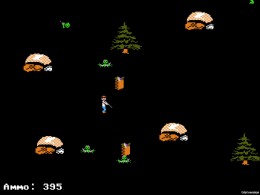 If you’re in the loop, you’ve probably given Organ Trail a spin. A flash version of it has been available forever. We’ve been playing the iPad version, which has a lot of key differences. For one, it’s not 1:1 pure parody like the flash version. In fact, it feels more like its own kind of survival game. This was a goal of the port.

“When we made the original version of the game in flash for free, we wanted to be as close as possible to the source material," Wiemeyer says. “It was a pure parody."

“But once people started to really like it, they wanted to see more, they wanted to see the game in contests and available on mobile. I didn’t feel right doing that since it was mostly … not our game. So, when we decided to pick the game up again, I wanted to push it well beyond its source material to make it our own title. Something we would be proud to sell and show off," he says.

The build we’re playing seems to be near final, and while it’s not visually light years ahead of its flash game source material, you can immediately see what The Hats have been doing to differentiate Organ Trail on mobile and tablets. For starters, it doesn’t have a laser-like focus on regurgitating everything Oregon Trail did. You don’t start out as a special character with a job that gives some kind of perk. Instead, you simply pick a number of supplies to start out with. This version is also more narrative-led. In fact, the experience begins with a series of scripted events designed to get you invested in the hollowed out, dangerous world of Organ Trail. 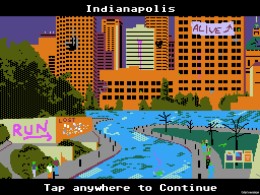 There’s a couple of other new, but smaller mechanics present in this version. You can now upgrade your car and repair it at special shops at specific landmark cities. Bosses now grace the hunting mini-game. Also, each town has a “job board." Taking jobs can net you big rewards, but they’re dangerous — sometimes even suicidal. One of our favorites we’ve come across so far is a “defend the position" mini-game that has you, from cover, using your precious ammunition against hordes and hordes of zombies. Another job has you bobbing up and down from cover and shooting at entrenched bandits as they return fire.

Speaking of bandits, these guys are often as dangerous as zombies. Randomly, bandits can steal supplies from you while on the road. They may even kidnap party members. When this happens, you’re whisked to a screen, given one bullet, and forced to try to take out the bandit while he’s holding a pal at gunpoint. Miss and your friend croaks. These features are also new to this version of the game.

Porting usually doesn’t see this many changes, so Organ Trail manages to feel like a fresh romp. The touch screen controls, by the way, are pretty good. Most of the time, you’ll just be clicking on menu items, but the action-y scavenging stuff feels OK. You move your character by tapping on the screen. To shoot, you swipe and hold in a direction.

Our Journey and the Death Tally 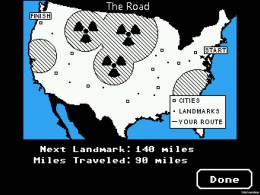 The journey to Safe Haven is a grueling one, and Organ Trail dishes out punishment at a steady clip. If you aren’t suffering from a disease or an injury, you’re worrying about your station wagon’s health or the amount of cash you have on-hand. It never seems like you can get a leg up on the game. None of our journeys have been spotless, all have seen casualties and woe as Organ Trail piles on disappointment after disappointment.

This was a specific point of design. Like Oregon Trail, Organ Trail is a game about the harsh reality of living in a dangerous world. The Hats explain:

“Well, I don’t know about you but I was never able to beat Oregon Trail when I was a kid. That game was brutal. And that’s part of the nostalgia. But even with that, I think working with dwindling resources really speaks to the any apocalyptic setting," Wiemeyer says.

“One of the reasons the apocalypse is such an interesting topic to many, is because you always think you have the right plan on how you would make it. It’s fun to think about where you live as an apocalyptic game: where can you could find supplies? Who would you bring with? Where would you bunker down?" 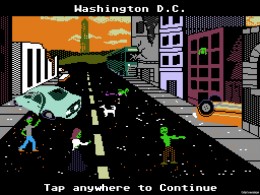 “As much as a I love being a zombie killing god in most other zombie games, we wanted the conflict in our game to be more human. The tough decisions aren’t whether or not to kill a zombie… but rather, do I have enough food and medical supplies to keep Bobby from turning? The zombies are just another source of drain. It’s pretty fun to make a game where you force people to put their own friends down."

Our first shot at making it out west was trying. At the start, we loaded up on ammo and med kits, and decided to just get one of every car part. From DC to Indianapolis we were attacked at grave sites, as dead adventurers rose from the earth. We hunted a couple of times, but stopped after encountering a mutant bear. As the station wagon broke down, we limped to St. Louis and sold off our vast supply of food for proper repairs and parts.

The misery soon started to stack up. We lost a character to a bandit. And then we had to shoot an incapacitated member of our crew for fear that his low health would lead to an in-party zombie outbreak. As we set a grueling pace to Texas, sickness began to become a problem. Health and spirits were low, the world started closing in. In Nevada we decided to take on a job in exchange for enough money to buy a couple of med kits. The horde was agitated at the time and the task, which had us looking for an item out in the wild, was listed as “suicidal." A rogue walker caught our lead character. He died, and Organ Trail offered up an option to write up an epitaph for him before the game ended.

The only thing we could think of was: we’ll be back. And we did come back, this time much more prepared for how terrible the journey to Safe Haven obviously is. Organ Trail doesn’t pull any punches. You have to learn how to soften its blows. And while a lot of its content might be random, the spots of cause and effect in the game are some of its most satisfying points of design. We dig the zombie dogs, too, but that’s just us.

Organ Trail is due out soon across iPhone, iPad, and Android devices, as well as Mac and PC. Future content is planned for the mobile versions at least. Stop and take a look at the images of our build in-action all around this article. We’ve also got a TA Plays of a short run we made earlier this week. Spoiler: we die.