When Team Meat announced that they were actually making a Super Meat Boy game for iOS on April 1st, it was hard to know whether they were serious or just pulling a prank, given their past history with the App Store. However, at the end of April we got an update on what Super Meat Boy: The Game, a built from the ground up touch-based version of their super popular console platformer, would be all about, and it sounded like they were taking things pretty seriously.

This past Friday, Team Meat posted some new information on their blog about Super Meat Boy: The Game, as well as some insight into their disdain for the App Store. In a nutshell, they’re not fans of the trend of timer-based games that force you to wait out your perceived progress unless you’ll pony up real money in-game to speed up the process. Think Farmville, Smurf’s Village, and the like.

Because of that the team is making sure that Super Meat Boy: The Game will be something that actually respects the player’s time and ensures there’s a real sense of fulfillment for conquering its challenges. Those who have enjoyed the original Super Meat Boy know just what they’re talking about. I’m excited to see how they translate their brand of twitch-based gameplay to the touch screen.

Here’s a new screen of Super Meat Boy: The Game showing one of the level select screens. 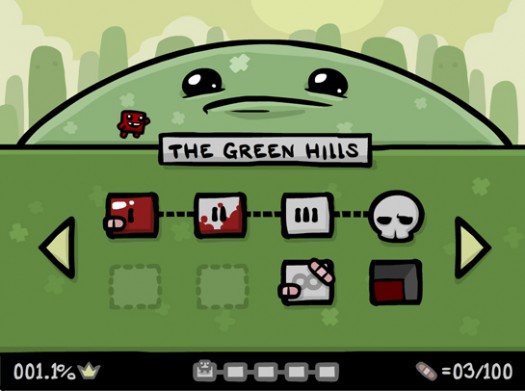 Team Meat notes that just because this screen shows only 8 levels, Super Meat Boy: The Game isn’t going to be your typical bite-sized mobile game, and the amount of content in the iOS game will be comparable to the original Super Meat Boy, but in a different way. They tease they’ll be explaining just what they mean by that in the near future, and we’ll keep an eye out for any further Super Meat Boy: The Game news as work continues on the title.