It was in July of last year that SNK Playmore brought their classic fighting game franchise to iOS with The King of Fighters-i ($2.99), and it was the only game that could really stand up to the then current standard for touch screen fighters Street Fighter IV ($4.99), and in many ways it even exceeded it. Which series you prefer is largely a personal preference thing, but I always felt that The King of Fighters-i edged out Street Fighter IV in overall quality and playability.

The problem was that by the time The King of Fighters-i hit the App Store, the superior sequel to Street Fighter IV had already been out for a month. It was called Street Fighter IV Volt ($4.99) and it came packing everything that made the original game so great plus additional characters, new features, and most importantly online multiplayer. The online matchmaking worked surprisingly well in Volt, and despite The King of Fighters-i being absolutely fantastic it was still just a single player- or Bluetooth multiplayer-only game, and online battling was the new hotness. 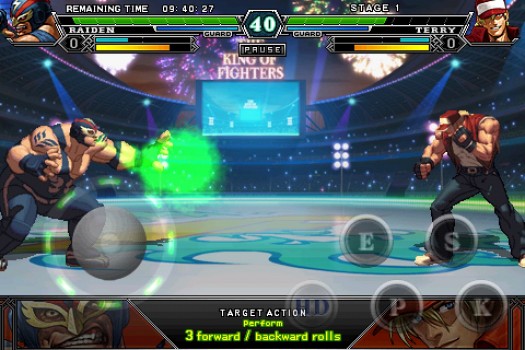 Now nearly a year later SNK Playmore is taking a page out of the Volt handbook with the just-released The King of Fighters-i 2012 ($0.99). This latest entry in the iOS KOF series contains everything from the first game that was great in addition to – much like the release of Volt – new characters, new features, and online WiFi multiplayer. Since basically everything from the first game is included in the 2012 edition, you might want to read our original review of KOF-i as well as the details of its extensive update to get the nitty gritty on the game.

As for what’s improved in The King of Fighters-i 2012, for starters the roster has been significantly expanded from 20 playable characters to 32. Art of Fighting, Psycho Soldier, Kim and Ikari are the 4 new teams of 3 that make up the new additions. Also, there are 2 more characters – Nests-style Kyo and Classic Iori – available as DLC for $1.99 each. These are alternate versions of existing characters, and they’re certainly entirely optional purchases, but it will be interesting to see if more characters end up coming down the road and if they’ll be paid or as a part of free updates. 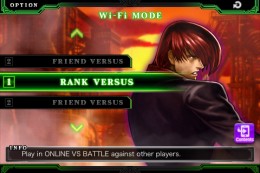 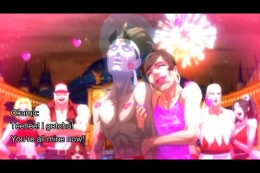 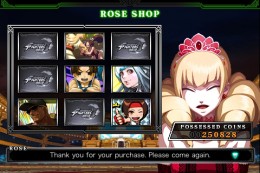 The single player part of the game includes everything that was in last year’s version: an arcade ladder in 3v3 team battles or 1v1 flavors, an endless survival mode, and an excellent training mode. The lengthy Challenge mode from the original game returns, with some new challenges thrown in for good measure. A brand new single player addition to KOF-i 2012 is a Time Attack mode. Here you must battle through 10 straight opponents as quickly as possible, with a Game Center leaderboard tracking your best overall time.

Time Attack is a nice addition to an already great single player offering in The King of Fighters-i 2012, but that’s not why we’re here. We came for the multiplayer. Naturally, the Bluetooth local multiplayer mode from the original game made its way into 2012, and remains a fine option for squaring off against a buddy in your same vicinity. However, the real draw in the new online WiFi multiplayer mode. 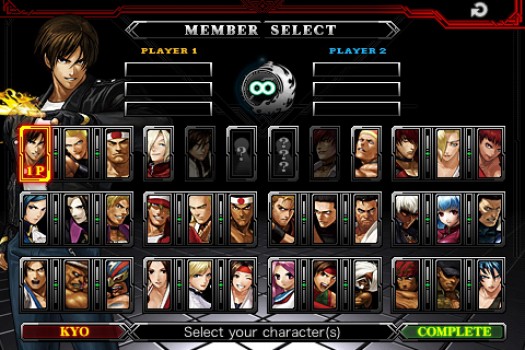 The online portion for KOF-i 2012 works about how you might expect if you’re familiar with Volt – that is, it’s pretty good but not great. Naturally there is a bit of lag at times, but nothing too earth-shattering. Finding a match can also take a long time but I imagine that will clear up a lot as more people get the game. When talking about real-time multiplayer on a mobile device like the iPhone, it’s hard to expect perfection. For what it is the online matchmaking in KOF-i 2012 is really fun for people who get tired of fighting against the CPU all the time. With the right expectations, it really is a killer feature of the new game.

So, with a large portion of The King of Fighters-i 2012 being nearly identical to last year’s release, whether or not you should buy this new edition will hinge on how important new characters and online play is to you. With a whopping 12 new fighters added to the roster, I think it’s worth upgrading just for that, and people in our forums are totally digging the new version too. Along with a decent online offering and KOF-i 12 is likely a worthy upgrade for fans of iOS fighters. One thing is for sure though, Street Fighter IV Volt now has some serious competition, and it looks like the future is pretty bright for fighting games on the App Store.