Since he started making games for iOS, indie developer Jeff Minter of Llamasoft has really been cranking them out. The guy has been making games — and, rather unique games, I might add — for over 30 years, but I don’t believe he’s ever dished out one after another faster than he’s doing for Apple’s platform. And that’s really good news for iOS gamers because all of his iOS titles are rather well done and worth playing. His latest title, Five A Day [link], which just landed in the App Store, comes close on the heels of Gridrunner for iOS, his excellent remake of his original 1982 VIC-20 game and one of the best shooters on the platform.

When we first reported that Minter was developing for iOS, about two and a half years ago, we mentioned a Time Pilot-style game that he was working on, set to be his first iOS release. Well, time passed, Minotaur Rescue arrived, and we never saw anything else about that supposed first iOS release. That is to say, not until now.

Five A Day is a shooter (with bananas), but it’s equally an ethereal experience of sorts. It’s a kind of spacey, zen sort of thing. It’s a little hard to describe, so I’ll let the author.

…it should’ve just progressed into a good old banana-oriented shooter as originally intended but by accident it sort of went all New Age and ambient. While still actually retaining the characteristic of actually being any good, of course. It didn’t just turn into a useless ageing hippy of a game that lies around smoking weed and listening to Steve Hillage and burbling on about auras and crystals without ever doing anything useful. Redolent it may be of joss sticks and wind chimes but it’s still jolly good fun and will kick your arse quite handily on the higher levels, just you wait and see.

But what turned the game all auras and wind chimes? Apparently, it’s largely due to the in-game audio which, Minter indicates, lead the way in shaping the game during its development.

It started relatively slowly at first, with just fluffy clouds and the addition of a rainbow trail behind the spaceship. Then I needed some audio and headed out to a site called Freesound, where you can download snippets of stuff and use them in your projects. You can search by keyword so I put in “Space”, and that was it, game was doomed from that point on. All manner of floaty synth sustains, whale noises, chimes and gongs, page after page of them. Once I started putting one or two of them into the game, the game more or less began to shape itself. By the time I got to the first shower of bananas and enumeration of the first end of level bonus the audio was already heading firmly in the direction of “epic New Age”, and that’s how it ended up.

So, there it is. Every Minter game I can think of is rather “out there," but this one is just a little moreso, perhaps (if you can imagine it). 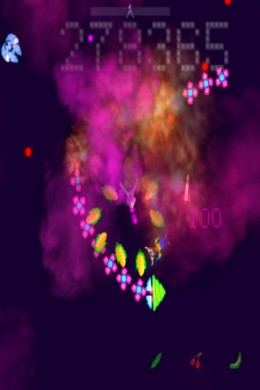 We’ve got the vibe covered, now for the gameplay. Five A Day puts you in control of a craft soaring through the clouds, forever shooting. The sky is full of baddies that resemble familiar, pixellated villains of video games’ past. Some of these baddies are in possession of fruit. You want the fruit, and you need to destroy said baddies to collect it. There are also rainbow-bejumpered minotaurs floating about. Collecting either of these places them in tow and increases your shield power (which enemy fire drains) and, in the case of the latter, results in a Death Blossom-style weapons discharge that is bad for those around you.

As you progress, other elements come into play as well, such as bosses, sky-mines, homing missiles, and the like. A goal of the game is to finish each round with at least one piece of fruit in tow, as five such completions in a row result in a bonus life for your having been the healthy lad and getting your five-a-day (of fruits and veggies). And the whole thing is set not to a frantic, pumping audio beat-track, but to the whispers and tinkles of a holistic astral massage parlor. It’s an interesting — and fairly odd — scenario.

Your ship can be controlled via touch, by drawing circles anywhere on the screen in indication of how you want to maneuver, as well as via tilt-control. As with most iOS Llamasoft titles, the iCade control unit is also supported. Our gameplay video demonstrates iCade and touch controls. Being a universal app, Five A Day plays nice with both iPhone and iPad.

I’ve been having a lot of fun over the past few days with Five A Day, as I have with every one of Minter’s iOS releases. (The guy’s catalog is outstanding and should be investigated by everyone reading this.) That said, the overall feel and pacing of the game — a bit more relaxed than the typical shooter out there — combined with the ethereal audio stylings deliver an experience that might come across as a bit of an oddity to the typical gamer as compared to most of his other iOS releases, or certainly most other shooters out there. I would recommend Five A Day to any like-minded gamer, but it’s definitely a different sort of shooter experience.