I came to Jeff Minter’s oeuvre late, around the time of the XBLA release of Space Giraffe. I mention this not (only) to display the depths of my ignorance, but to provide context: there’s more to love in Gridrunner [$0.99] than just nostalgia. For anyone who missed the heyday of the Commodore 64, Minter’s iOS titles might seem a bit unapproachable, but consider giving them a shot – they might surprise you.

Gridrunner wears its roots proudly, but it isn’t a dogmatically faithful recreation of the 1982 original. Or, rather, it isn’t only that: both the Vic-20 and Commodore 64 version of the title are present here as optional modes. The real fun is in the remake, which takes the things that made Gridrunner great from the start and runs with them. The grid and its cruel lasers, the little ship that faces them down alone, the flying droids and the missile pods they leave behind – all these things return. This time they bring along retina graphics, power ups, new foes and moments of bullet-pulsing glory.

This isn’t the first time that Minter has revisited Gridrunner—it’s the third in the last decade alone. Gridrunner++ was released in 2002 and Gridrunner Revolution came out in 2009. Both brought in big changes. They were trippy, colorful departures, introducing features like score multipliers and ship rotation. This new iteration hews a little closer to the original, but Minter has clearly brought in much of the game design wisdom he’s picked up in the interim. The resulting game looks and plays like the original – assuming your memories of the original come with a big helping of rose-tinted nostalgia. 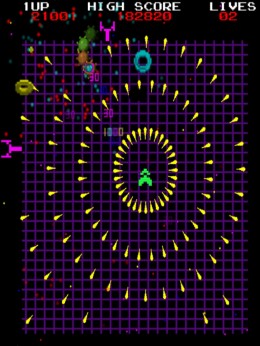 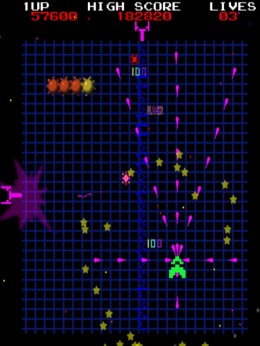 This new Gridrunner is a great little vertical shooter, the classic turned on its side. There is only one potential problem standing in the way of enjoying it as much as any retroesque shooter on iOS – its controls. If you play on an iPhone or iPod touch, you might be in for trouble. If you play on iPad, have patience. Once you’re past the learning curve, things will be just fine.

The controls feel quite a bit like Mage Gauntlet’s [$2.99] Pro Stick. As with that game’s superb virtual joystick, you can put your finger nearly anywhere on screen and move your fingertip minutely to move your ship in any direction. This took some adjustment. Most vertical shooters I’ve played use 1:1 movement ratios, and emulating that had hilarious but wildly ineffective results. I had to learn to move gently, and to stop lifting my finger (for goodness’ sake). Once I got over that hump I was very satisfied with the precision of the controls, especially once I switched to my iPad. They’re equally precise on smaller devices, but I can’t find a spot to comfortably rest my finger without regularly blocking important stuff like my ship and the things coming to kill it. 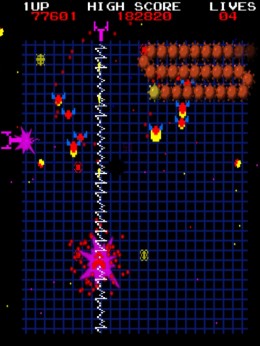 After moving over to iPad, I could finally see what all the fuss was about. It’s hard to survive in the world of Gridrunner. As with any shooter, there’s a mess of enemies to deal with. Centipedes that travel back and forth and diagonally, blobs that travel erratically, shrapnel bombs, ships that hunt you—the list goes on. Some leave behind static pods that must be destroyed before they drop missiles (though those missiles are worth quite a few points if shot down…), and all the while a laser travels across the edge of the grid, firing downward every few seconds.

Defeating enemies is particularly rewarding in this iteration, as many drop rings that power up your shots. There are eight different powerups, and they can be stacked and combined in interesting ways. There are spread shots and directional shots that can speed up, spread out, last longer and ultimately explode into bullet hell when upgraded far enough. This lasts only moments, but it’s an incredibly satisfying few seconds while it does.

Without multipliers or any other finicky scoring mechanics to worry about, surviving is the only real mark of success. With so much out to kill you, you can’t afford to let your focus drift for even a moment. You’ll die a lot, but Gridrunner has that covered: at the end of each level it awards an extra life. This won’t always be enough. Eventually you’ll burn out your last life, and then it’s game over. 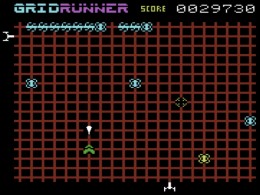 For players who are more concerned with seeing all the levels than earning the most prestigious scores, Gridrunner has a casual mode. This saves your best scores and life count every four levels and lets your restart there when you fail. Casual mode is ranked on its own leaderboard, but it’s still worth playing for those of us who need a little help progressing. For the hardcore, Pure mode is where it’s at.

As I mentioned, you can also play the original Vic-20 and Commodore 64 versions of the game. It took me a little while to find them, but I adore the way they’re accessed: just turn your device on its side. Either side will do, as each offers its own alternate mode. Cool, no? Also a bit opaque, but them’s the breaks when Minter’s involved. Similarly, the game is paused by tapping a spot in the middle of the upper half of the screen. There’s an invisible paw/heart shape there, I’m sure you’ll manage to find it.

There are more than a few other Minterisms to be found – odd text splashes as you progress, ridiculous kudos for passing each level, that sort of thing. Still, this is one of the more restrained games of his I’ve played, easy on goat breeding, llamas, wacky visuals and awkward sound effects. I rather miss those things, but I suppose we’ll always have GoatUp [$1.99].

Whether you have reason to be nostalgic for Gridrunner or not, it’s worth checking out. It’s a best-of-both-worlds sort of remake: faithful to its forebearers but filled with clever modern enhancements. If you’re dead-set on believing that the original is best, you can go ahead and play that instead. It even has its own leaderboard. Really, though, newer is better in this case. Hopefully we’ll see an alternative control set for the iPhone and iPod touch crew, but if you’ve got an iPad it’s all systems go. Enjoy, and pop by our forum thread to brag about your high score.