Early last month we previewed Solar Minotaur Rescue Frenzy from noted psychedelic shooter author Jeff Minter. The game is basically a trippy combination of Asteroids and Space War! played on the screen of the iPhone or iPad and marks the first in a series of Llamasoft games that are part of the “Minotaur Project," an effort by the developer to release numerous titles featuring retro gameplay, progressing forward from the Atari VCS aesthetic to the VIC 20, Commodore 64, and beyond.

The game is now complete and, with a few additions and enhancements over the preview build examined earlier, is available for download in the App Store [link]. 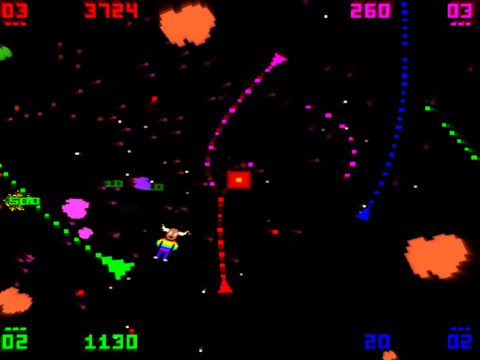 Minotaur Rescue, which is a Universal app that natively supports both the iPhone and the iPad, consists of an active starfield play area with a sun at the center. In its core gameplay mode, you control an ever-firing ship that can fly about this starfield (wrapping at the edges) and is affected by the intense gravitational pull of the aforementioned sun. And so, too, are the asteroids closing in from the edges. Your job is to blast apart these asteroids (as opposed to slamming into them), some of which contain minotaurs that must be rescued before they drift into the sun. If too many asteroids drift into the sun, it will turn into a black hole…which is bad. The closer to the sun a minotaur gets before you rescue him, the more points you gain for said rescue. And, the more minotaurs you rescue and the closer you are to the sun, the faster your auto-fire tosses out rounds. Just to keep you fully on your toes, the occasional enemy saucer passes through (and some are tiny), shooting at you and dropping mines.

A touch-anywhere control pad puts you in the pilot’s seat, with perpetual auto-fire engaged, as mentioned previously. 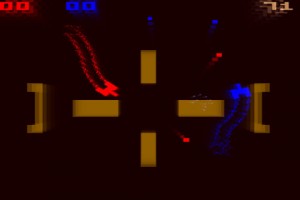 In addition to the core gameplay mode, Minotaur Rescue features four other playmodes, as well. There’s Survival mode, where you’ve got just one life in a bid to score as highly as possible before obliteration. There’s also Deep Space Minotaur Madness which is like the core gameplay mode, but with only the Asteroids elements in place (plus minotaurs) — no sun and associated gravity. And, perhaps oddly, there’s also the Tanks! and Jets! modes, which are like the simple playmodes of the pack-in Atari VCS cartridge Combat. But, of course, with a heavy dose of psychedelia and floating minotaurs to pick up along the way.

See Minotaur Jeff demonstrating the game on an iPad.

Minotaur Rescue makes use of Llamasoft’s new Neon 2 game engine for iOS, an evolution of the original Neon “light synthesizer" engine, which powers the XBOX 360’s music visualizer and Space Giraffe title. According to Minter, Neon 2 is much improved as compared to the original, featuring a cleaner framework and a lot more bang-for-the-buck in terms of shader usage.

As fan of Minter’s work, and of retro titles in general, I’ve had a blast with Solar Minotaur Rescue Frenzy, but also feel that the simple yet challenging gameplay may appeal to a wider audience, as well.