Inco is alone. His parents are dead, and so is his universe. He’s the last living human, and a survivor of a horrible, no-good, very bad event that turned his universe’s suns to char. He doesn’t brood, which is a good thing since no-one likes a crybaby, but I really feel for the guy: he lives among broken toys and dwells in total darkness. When Incoboto opens, you’ll see him peering into an especially black space with his telescope, perhaps searching for answers.

He finds one in a curiously sentient, but obviously mad sun named Helios. Helios is babyish and overexcitable. He giggles like an infant and devours like one, too. But he is also odd and knowing in the way that he floats about pointing to the things he can fix if, and just if, Inco can find more fuel for him. 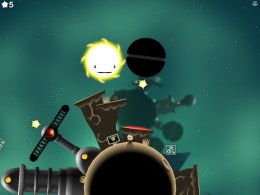 They’re as perfect of a fit as Inco is going to find considering everyone is dead and all, so the two strike up a friendship set off across the universe. Helios wants stars, while Inco just wants to find someone. Conveniently, when Helios gobbles a star, he gains enough power to turn on the world’s contraptions.

This is the premise of Dene Carter’s imaginative 2D side-scroller Incoboto, a game that we’ve had our hands all over for the last week or so. Carter is an ex-Lionhead Studios veteran, and you can see that studio’s creative spirit all over it. It’s the end result of hundreds of different ideas that have been mashed together into an imaginative romp that has things to say about death, living, corporate control, adventure game design, exploration, and many other things.

Breaking it down mechanically into a snappy phrase isn’t easy. In our audio interview this week, Dene said he gave up trying to pitch the game. Incoboto is too odd, too much its own game. 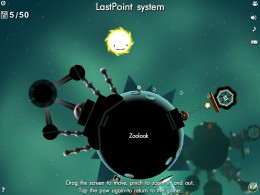 The core components of the game’s overall structure and design seemingly owes a lot to the small creative team at Nintendo behind the original Super Mario Galaxy. Incoboto is the end result of what would happen if that team squashed that experience into 2D, and in the process of torturing, manipulating, and cleansing it, injected new features and the bent, almost dreamlike signature whimsy of a Lionhead production.

I don’t want to sell this short; Incoboto clearly is its own title. But its core action revolves around loosely adapted concepts and mechanics popularized by Galaxy. It plays around with physics a lot, and you’ll find yourself pulling a ton of levers and scaling a lot of oddities in a quest to collect stars across a series of interconnected globes that you can travel to and from freely.

If you’re still lost, take a gander at this trailer. This should put you in the right head space. Note the almost total lack of UI:

The game’s camera acts as a rod, slowly spinning the world as you move around it. One of the coolest elements of Incoboto is its one-touch controls. To run, press a finger in a direction. To jump, press that finger down again. It’s really simple, and it works. One of its other cool elements? The Corporation. In the game, you’ll discover that everything in Inco’s world has been created by an overly-observent mega-company that seemed to exist simply to create the most inane things ever invented, and then post PR-friendly signs about them everywhere.

At its heart, Incoboto is a puzzle game. Collecting stars allows Helios to open brand new passageways to other worlds. However, most of these stars are tucked out of reach, or require some fanciful solutions to get to. 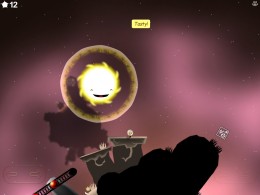 You’ll run across puzzles that will have you lining up rods to complete an electrical circuit. In one specific case, we rotated a physics-based puzzle box with a ball on the opposite end of where it needed to be. Sometimes, you’ll be smacking switches with rocks or explosives. Other times, you’ll be scaling a world in a precise way to reach a star.

The puzzle design is lightly schizophrenic; there’s a lot of ideas floating around in the game, and you’ll see a lot of different puzzles as a result. The kickback is that you’ll hit a lot video game logic walls. New puzzles just don’t jive with the old. I got stuck within the first hour, and then again in the second, and then big-time during the third.

Seriously, Dene says this is basically the point: he wants you to get stuck or feel funny, and then to have to probe your friends for answers. He views this as a mechanic in an age where everyone wants to hold your hand. How indie.

As you progress, you’ll find tools and other objects that expand what you can do while digging for stars. Early, you find a glove that allows you to throw rocks at springy targets. The first item gives you the power to find hidden buttons and switches with a gentle pinch and zoom motion. 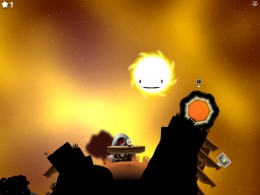 My time with Incoboto has been short, and I got stuck a lot. It’s a discouraging kind of feeling, so I’m not quite sure what that says about me or how I’m clicking with some of the fundamental design. It’s nice to have an actual challenge, I guess, but I don’t want the difficulty to keep me from seeing everything Dene has created. This is a beautiful, beautiful world with music that blends into the atmosphere as smoothly as a smooth thing.

I’m eager to see more in the final version, which by the way, should appear at some point this March on iPad. If you’d like to hear Dene talk about his game, consider checking out our most recent podcast. If you’d like to see more of the game, there is a really, really thriving discussion in our message board right now.