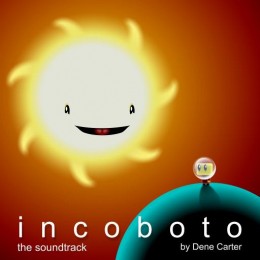 Last week, TouchArcade hooked up with Fluttermind‘s Dene Carter to talk about his studio and its first release, Incoboto. If you’ve been following the production of the 2D side-scrolling puzzle, er, experience on our forums, you’ve seen enough to make one of those purchasing gut checks. You’ve noticed how good it looks. You’ve got a sense of its scope and scale and tasted its tone. If you’ve been reading especially closely, you might have even been infected by Dene’s quirk and enthusiasm. He got us, at least.

This isn’t an easy game to talk about off-handedly. It’s not as derivative as most mash ups, and it’s also really strange. We asked Dene for his elevator pitch, which revealed something vital about the project as a cohesive whole: it’s about embracing the odd or the irrational. 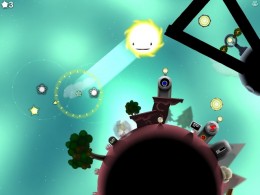 You’ll see what he’s talking if you give the game’s trailer, which is embedded below, some of your time. Incoboto‘s look is bent, yet whimsical. Its devilishly constructed puzzles are, too.

In our minds, Incoboto has the most in common in Super Mario Galaxy. It revolves around similar physics-based hooks and trickery. Also, its moment-to-moment play, boiled down, is all about traversing and progressing through a series of interconnected “planets" with stars to collect.

When we brought this up, Dene was cool with the comparison. He added, however, that his title departs quickly with its difficulty and puzzles. He’s right. Within an hour of play, you’ll realize that difficulty spikes define the experience. This is a game that isn’t afraid to throw you under the bus with new, unexplored mechanics and puzzles.

In fact, getting you stuck and frustrated in its odd world is kind of the point. Dene told us that he realizes that, in this age of in-game guides and hand-holding, this is a crazy plan. He called it suicide, actually, but he likes the idea of people having to talk to each other about solutions, or having to come back to the game later when their heads are clearer. 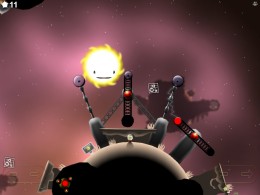 “I’m doing things with this game that’s kind of suicide from a business point of view. I kind of decided I didn’t care. One of the things I will not be doing — this is not a game that is ever going to be free. I’m not going to suddenly whack the price down as it nears Christmas. This game is going to come out and be one price, so I already know I’m not going to make any money," Dene said.

“The difficulty level is another part of that really. I want people to discuss it. If you make it so people are kind of tourists through the entire experience, then it’s literally basically like putting someone in a shopping cart and dragging them all the way past everything in the game as quickly as possible so they can move on to the next thing."

“I want people to get stuck. But because it’s not a game that where get stuck by dying the whole time — I mean there’s no death in there — you get stuck because you haven’t really understood the implications of everything around you. I think that’s a lovely position to be in, when you know that all you have to do is pick up the game again and have another go, and you probably find that it’s something you missed the last time. There’s usually clues around, some kind of hint as to what’s there." 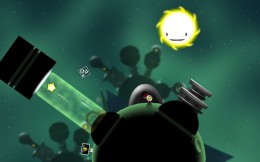 “If it’s not there, then hell, go out and discuss it with your friends. Please, talk about it. Tell people where you go stuck. That’s part of the fun of the game really. There are no people to talk to in this world, they’re all dead, so go talk to some real ones."

We’ll have much, much more on Incoboto later this week so we’re going to hold back on the game’s nitty-gritty for the moment. If you’d like to learn more about the game from the guy who made it, however, give this week’s interview podcast a listen. Sound issues aside, it was easily one of our smoothest, most informative we’ve done.

Other topics we cover include Dene’s past relationship with Lionhead, his future with a new studio composed of a few key Lionhead members, acorns, and his thoughts on iOS as a whole.

We’ll be back next week with another bonus podcast.