Some former developers from True Axis and Firemint have banded together to form a new studio called Ninth Ninja and are readying a release of the classic dual-stick shooter Mutant Storm for iPad. Mutant Storm was originally released by PomPom Games for the PC, Mac, and Xbox, and was amongst the first to spark off a rebirth of retro-style arcade games in the past 10 years or so. It was also remastered and re-released as Mutant Storm Reloaded on Xbox Live Arcade in 2005. 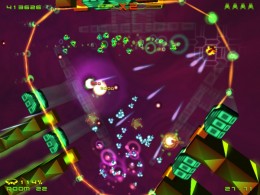 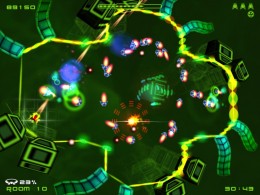 You may remember that another PomPom Games release called Space Tripper [$3.99] made its way to iOS last year thanks to the porting efforts of True Axis. It also shouldn’t be forgotten that the Space Tripper iOS project was filled with trials and tribulations before it finally ended up on the App Store after more than 3 years of development. The wait seemed to be worth it though, as Space Tripper’s gameplay held up strong on iOS and the performance was rock solid.

Andy Coates, the former one half of developer True Axis, was responsible for a majority of the Space Tripper iOS port. He’s putting all that previous hard work to good use by using the same engine for the Mutant Storm port, and again the game is running at a solid 60fps on the iPad 2 and is running respectably smooth on the original iPad as well. Check out the developer’s hands on video of Mutant Storm running on the iPad.

Development on Mutant Storm is said to be going a whole lot smoother than it did with Space Tripper, so chances are we won’t be waiting 3 years to get our hands on the game (hopefully I didn’t just jinx it). In fact, Andy says that the game is basically finished, and that all that remains is some work to do on the menus and online integration. Ninth Ninja is hoping to have Mutant Storm out in April or May of this year.

Ninth Ninja has also announced that they are currently working on a brand new iOS project in addition to Mutant Storm. Adrian Moore, who had previously worked on Firemint’s Spy Mouse, will be handling the design. Artwork will be Paul Mitchell’s job, and he most recently has worked on the Real Racing series, also from Firemint. And of course, Andy Coates will be handling the programming of this mystery title.

We expect to have lots more on Mutant Storm and the mystery game from Ninth Ninja, especially with GDC just a couple of weeks away, so keep your eyes on this space.