In between two of those releases, CAVE decided to branch out into something different, and brought out an iOS exclusive game called Mushihimesama Bug Panic. It was a departure from their typical offerings as it was a dual-stick action game, but it retained the frantic nature of their bullet hell games extremely well and was equally adored amongst critics and fans.

Now we have CAVE’s latest release, which kind of brings things full circle. Mushihimesama is a vertical shmup released in Japanese arcades back in 2004. It’s seen a sequel with Mushihimesama Futari, and a spinoff title called Puzzle! Mushihimetama. Bug Panic on iOS is actually based in the Mushihimesama universe, featuring the same female main character and insect-based enemies. Now the original Mushihimesama title is available on the App Store as Bug Princess [$4.99]. 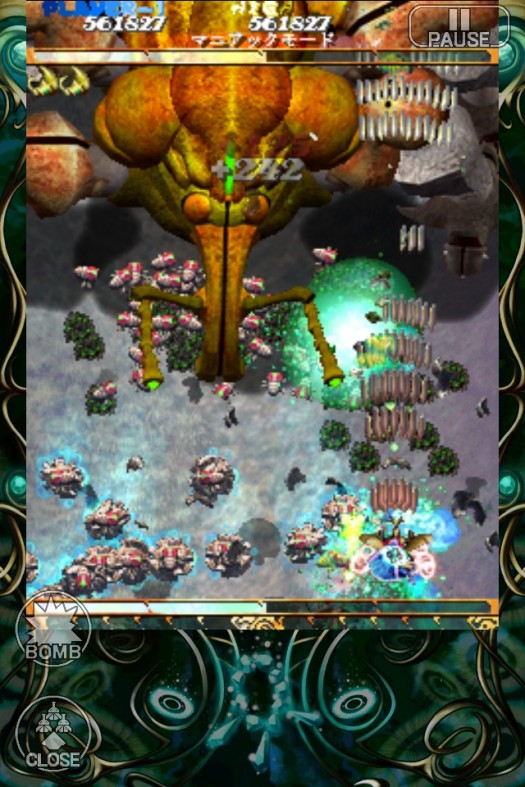 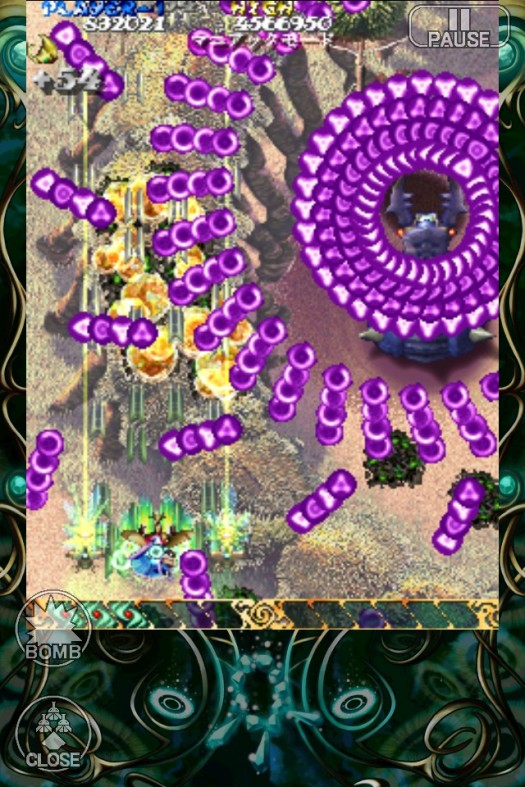 Typically with CAVE’s iOS ports, there will be the full original arcade version of the game along with an enhanced Smartphone Mode which contains additional things like scoring tweaks, different enemies or ships, and alternate ways to play the game. Bug Princess bucks this trend and doesn’t have a reworked Smartphone Mode, but the original game had three different modes anyway so there are still different ways to play through the game. The three modes in Bug Princess are Original, Maniac, and Ultra. Sadly, the special Arranged mode from the PlayStation 2 port didn’t make it to the iOS version.

Gameplay across each of the 3 modes is similar. You can pick from 3 different ships to play as, each offering a different firing style. One sends a concentrated spray of bullets in a straight stream, one fires less powerful shots but in an incredibly wide stream, and the third ship fires both straight ahead and diagonally at the same time giving a balance between shot coverage and power. You’ll play through 5 stages absolutely filled to the brim with enemies and bullets flying everywhere, along with crazy mid and end of level boss fights. In every mode, you can choose to play straight through the 5 stages in a single run, or choose each level individually to play through score attack style. 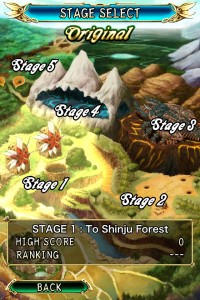 Along the way, you’ll be able to collect upgrades for your main firepower, increasing the strength and quantity of your shots. There are bombs which will clear a huge area of the screen, and you can also pick up a little squad of support ships to fly along with you and add some firepower. You can choose two different formations for this support squad, a wide spread or concentrated in a narrow spray.

Scoring in Original mode is fairly straightforward. Shoot every enemy you see, collect the gems they leave behind, and have them tallied up at the end of a level to determine final score. Maniac and Ultra modes, however, add a wrinkle to this formula. In those modes a counter in the upper corner increases with every shot that connects with an enemy, and decreases when no enemies are being shot. Whenever you kill an enemy, whatever the number that the counter is at is added to your score as a bonus. So if you’re at the 2000 mark on your counter, ever enemy you kill gives you an additional 2000 points, each.

Needless to say, this tiny facet can drastically change how you approach the game, and adds lots of strategy to getting high scores. If you’re mindful of the need to always be shooting something, you can get that counter up into the tens of thousands or more, especially with some of the larger bullet sponge enemies and bosses. This added score complexity makes Maniac and Ultra the more interesting modes to play, but they are also significantly more difficult than Original mode.

Speaking of difficulty, you can choose from 4 of them in Bug Princess. It’s a trip to see just how different they are from each other too, in terms of the amount of bullets onscreen and the complexity of bullet patterns. Novice is an easy trip for any casual gamer who merely wants to be able to play through the game without much fuss. But crank the difficulty up to Hell, which is basically exact to the arcade original, and you will be crying for momma before the halfway point of the first level. The 3 modes and various difficulty options really help cater the game to a wide audience, and even if you’re not a bullet hell pro (which I’m not!) then there is still plenty to enjoy.

There were a couple of things about Bug Princess that I didn’t enjoy, though. First off, the game uses both Game Center and OpenFeint for achievements and leaderboards which is great, but they plaster that awful OpenFeint game feed onto the title screen. Admittedly that’s not a problem with the game itself, but the feed is distracting and ugly, slow to load, and cheapens an otherwise top-notch presentation. At least give me the option to turn that bad boy off, please. My other issue with the game is that the load times in general are a bit long, which isn’t a great feature for a mobile title.

Aside from those small quibbles, Bug Princess offers yet another stellar entry in CAVE’s series of iOS shooters. It’s probably the most straight forward and least complex out of them all, which makes it a great starting point for bullet hell newbies, but it does have its share of depth for those looking to master its strategies. And like all CAVE shooters, the touch controls are fantastic, the visuals are striking, and the action is non-stop. Plus, Bug Princess is the first from CAVE to be Universal, and while I prefer playing on the iPhone, it plays pretty nice on the iPad too. At its current price of $4.99, Bug Princess should be a no brainer for your next bullet hell fix.