Toxic Blob‘s puzzle-meets-strategy game Sin or Win feels like it has some issues with its actual execution, but it’s ultimately an entertaining-enough game that presents a really cool idea: moral choice as a viable, fundamental game-changing mechanic.

In games like Mass Effect 2, for example, its moral choice system boils down to being a space jerk or a space saint — the difference between booting a dude through a window or getting chatty with him. There are other constructs that flesh out these decisions, but you don’t change the way you fundamentally shoot stuff because of what you’ve done.

Sin or Win, on the other hand, incorporates two unique play styles and introduces basically two different kinds of puzzle games depending on your moral choice: sinning or winning. With a stroke of your finger, you can become the savior of its physics-enabled cavemen, or you can masterfully bring them to their individual fiery dooms. Each route has a unique kind of scoring and its own strategies. The choice, then, changes play. 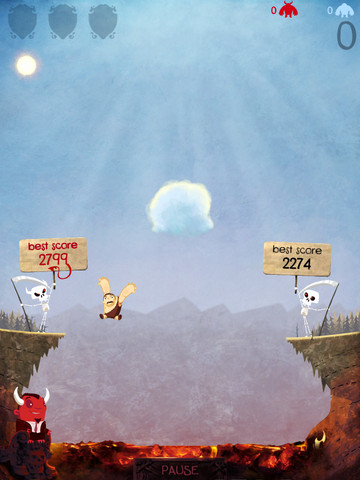 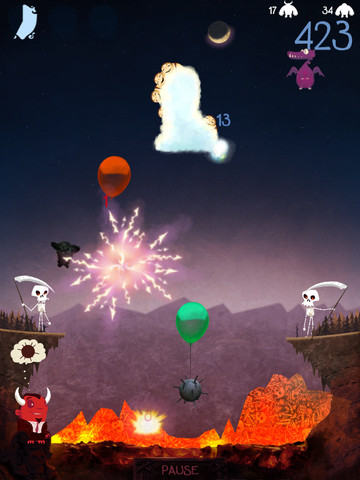 It’s really hard to call this just a “puzzle" game because it’s unlike any puzzle title I’ve seen before. There are cavemen, and then there are the clouds, the pit of lava, and the various “fiends," which range from a dragon to a laser-spewing UFO.

The playful, bumbling cavemen are the game pieces. They shoot from either side of the screen, happily bouncing off the confines of the game’s single level. With a nudge, you can send them whizzing to and fro. Dropping them lovingly into a cloud is “winning," while pushing them into the fiery pit, equipped the cutest Satan you’ve ever seen, is “sinning."

As you drop cavemen into the pit, it gradually fills. Once the pit hits the brim of the actual ground, the game ends.

You’ll be given sin or win points based on how you dispose of the cavemen. The combo system, however, is universally tied to how long you can juggle these boneheads. The trick to huge scores is keeping these guys up in the air for extended periods. 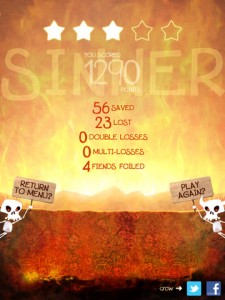 The grim reapers, who bookshelf the playing area, assign points in either a “sin" or “win" column. Winning, I find, is all about caressing the cavemen — which is to say, gently pushing them towards a cloud. You’ll also need to care about their plight, as each death nets sin points. Sinning, in contrast, involves dramatic movements, flings with flair and little care, and the creation of disastrous collisions to ensure that no-one gets to sit happy and comfortable inside a cloud for extended periods.

Both methods of play are viable, and each sort of incorporates the game’s other parts in a few different ways. For example, you’ll want to keep the dragon well away from your cavemen if you’re winning; maybe, hopefully dashing it against the pit in short order. If you’re sinning, you might want to keep it around, as it has the ability to lower the level of the pit and maximize the profit of your misdeeds.

What I particularly enjoy on a conceptual level is that it’s much harder to sin than to win. In most games, it’s the other way around. But… I don’t feel like the execution of some of sinning’s mechanics are up to snuff. 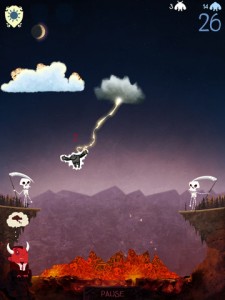 Straight-up, it’s too hard to juggle and also manage the random beasts or items that you need to drop into the pit at the same time — it’s too demanding and the game moves too fast. On the flip-side, it’s a tad too easy to float the cavemen into a cloud. And while hard flicks will cause the cloud to drop its cavemen, the clouds can also disappear once it reaches a quota, which removes the danger altogether. I’d like to see more balance.

That said, I don’t think these qualms entirely rob the game of fun. Putting aside the intensity for a second, the challenge of juggling multiple cavemen is satisfying enough, and the controls are up to the task. The physics are predictable and fun to exploit, as well, and you’ll get a pretty good grip of what the game does in no time.

Figuring out your approach to each session is probably Sin Or Win‘s greatest strength. The moral choice is something of a strategy component, too, as you’ll want to prioritize and maximize as you play. Of note, it’s also completely OK to hover in a grey area. Want to sin and win? You can — and this leads oftentimes to the longest and most enjoyable spurts of play, in my experience.

Sin or Win has its ups and downs. The OK core play, however, and the flat-out ingenuity on display helps makes the “downs" a little easier on the soul. We suggest giving it a look, especially if you’re into an experience that turns moral choice into a play mechanic. That alone is pretty unique in this space. Oh, and it doesn’t hurt that this game’s art direction is superb, either. So cute and grim at the same time — it’s a little like Grim Fandango but with a super rustic, fairy tail-y twist.