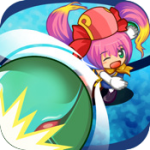 Back in September, developer CAVE announced they were creating an original iPhone game based on their Mushihimesama series titled Mushihimesama Bug Panic. The next month they released a video showing gameplay in Bug Panic, and we’ve been anxious to get our hands on the game ever since. Tonight, Mushihimesama Bug Panic [$3.99] went live in the US App Store. With CAVE’s previous releases Espgaluda II [$8.99/Lite] and Dodonpachi Resurrection [$8.99/Lite] setting the bar rather high for iOS games, I was curious to see how Bug Panic would stack up considering it was out of their typical comfort zone of bullet hell shmups. I’m happy to report that Bug Panic meets the high expectations of a CAVE title, offering a fun and unique adventure that’s perfectly suited to the platform.

Mushihimesama Bug Panic would be considered a dual-stick shooter, but not exactly like the ones we’ve previously seen flood the App Store. Your main character, the adorable “Insect Princess” Reco, moves around the environment with a left analog stick that can either be fixed in the corner or appear wherever you place your thumb. The right stick controls a cursor that represents where you will toss your Burst Seeds, the ammunition in the game that function similarly to grenades. Placing your thumb on the right stick allows you to move the cursor around and releasing your thumb actually fires. As your thumb is held down, a meter at the bottom fills up allowing you to charge your Burst Seed shots for extra damage and splash range. 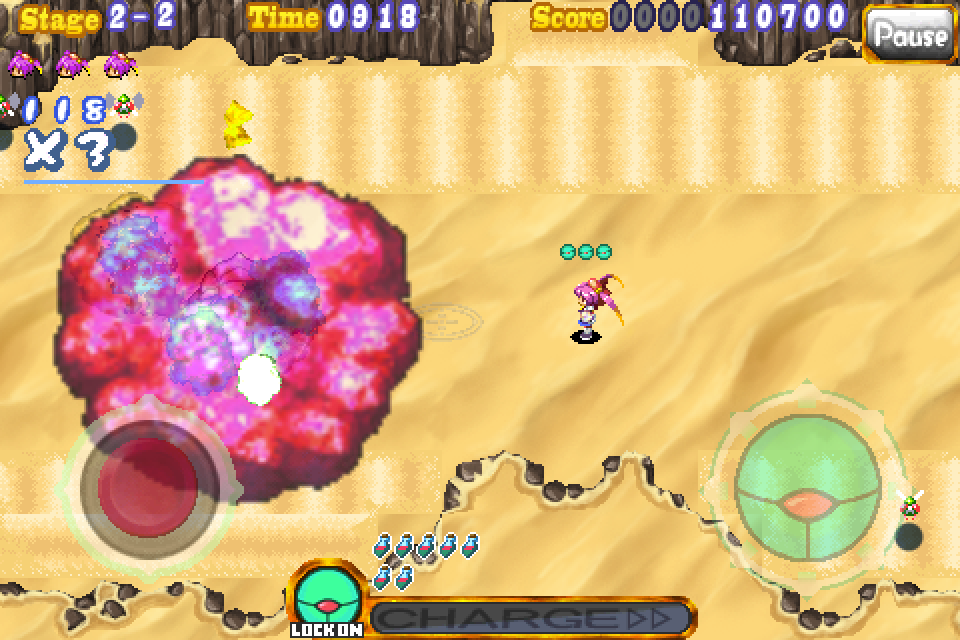 Adding to this interesting offensive mechanic is the ability to lock your targeting reticule on up to three enemies. This effectively lets you toss your Burst Seeds in three completely different directions if you want, or target three enemies in the same group to deliver a wider area of damage. This lock-on feature can be disabled at any time, giving you full manual control of where your shots land, but I actually found that it added tremendously to the strategy of the game. Choosing which enemies to lock onto and when to charge up your shots is what really sets Bug Panic apart from other dual-stick shooters, and it will be hard to go back to one where the right stick just mindlessly fires bullets in a single direction.

The bulk of Bug Panic is the Adventure mode that follows the story of Reco as she battles against the bugs in her world that have seemingly gone wild. There are five different worlds to play through, each with four levels and a boss level. Each level is fairly large, with multiple pathways and hidden secrets to find. As with any good CAVE game, a multiplier system lets you chase crazy high scores by killing multiple enemies in succession. After you complete a world by defeating its boss, that world is then unlocked in a Score Trials mode. As fun as playing through the Adventure mode is, Score Trials mode is what will bring you back to Bug Panic for a long time to come. Here you can play against the enemies of each unlocked world in a 2 minute timed trial or an endless survival trial, with scores for each being tracked with Game Center leaderboards.

There are many other nuances to Bug Panic as well, like specific goals to achieve for each level and hidden puzzle pieces that are part of a bonus mini-game. It features the same wonderful pixel art and massive amounts of onscreen sprites that the developer is known for, and offers a unique take on dual-stick shooting that controls like a charm and mixes beautifully with the bullet hell style action. There’s a tremendous amount of replayability with the different modes and unlockables as well. Like other CAVE games, Bug Panic will only run on 3rd generation devices and higher. The game is currently on sale for $3.99 for the first four days before returning to the regular price of $4.99, and a lite version should be launching in the very near future. Our forums are full of positive impressions of the game, and I’d have to agree that Mushihimesama Bug Panic is another excellent entry from the folks at CAVE.