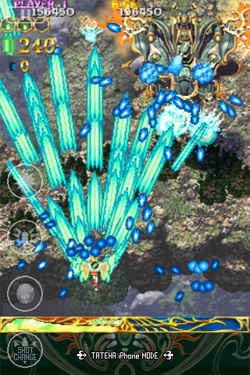 Any truly diehard arcade shooter fan will have heard of Cave. Founded in 1994, the Japanese gamemaker is responsible for some of the most highly acclaimed scrolling shooters to have ever appeared in an arcade. With their 1995 release of DonPachi, the company created a new, intense genre of shooter known commonly as the “manic shooter" or “bullet hell" shooter, in which the screen is almost entirely filled with enemy fire, and successfully evading said fire requires extreme control precision and skill. It’s a prevalent genre in Japan that is far less-represented in the West. (Some such titles readers may be familiar with include Ikaruga (Xbox 360, Gamecube), Triggerheart Exelica (Xbox 360, PS2, Dreamcast)  and Noiz2sa [App Store].)

In a move that should have iPhone shooter fans standing up and cheering, Cave has just thrown their hat into the iPhone gaming ring with their port of the 2005 Japanese Arcade / Xbox 360 release Espgaluda II [App Store]. A sequel to the original Japanese arcade and PS2 release, Espgaluda II is a bullet hell-style shooter that was released in 2005. The iPhone version seeks to bring a fast-action, arcade quality shooter experience to our favorite mobile platform. 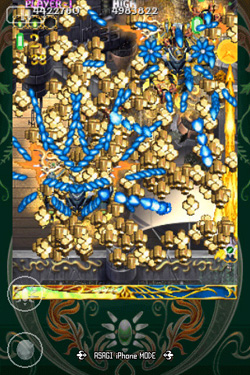 The first thing I said to myself upon jumping into a game of Espgaluda II was, “finally!" I’ve long lamented the fact that the iPhone 2D scrolling shooter experience was, across the board, pretty much a slow-motion affair as compared to that of even much older consoles such as the Sega Saturn and Sony Playstation. Cave’s first iPhone shooter throws an x/y scrolling backdrop along with an incredible number of moving objects onscreen at once, and the whole thing just flies. Fast action at a super-smooth framerate. (There’s a settings option to set the screen size, if you want to tweak performance a bit.) It’s certainly the most impressive iPhone shooter to date from a technical standpoint. But all this pixellated magic didn’t come without a price; Espgaluda II presently only runs on the iPhone 3GS and the iPad (with 3G iPod touch support coming soon in an update). Older devices just can’t push this scale of pixels, it seems.

Gameplay involves using touch controls to maneuver your craft about the playfield, destroying enemies, dodging their fire, and collecting Spirit Stones and power-ups. Along the left or right of the screen (user’s choice) are special function buttons that trigger a Guard shield / attack mode, Awakening mode (more on this later), auto-fire on / off, and weapons mode select — some of which may not be presented depending on the control mode you’ve chosen, among Simplified, Normal, and Expert. The touch controls work quite well and offer better control than either the stick or D-pad of the earlier arcade and Xbox 360 versions. Thankfully, you can tap and hold some distance from your onscreen craft to control it without obscuring your view of it.

Each level is concluded by a boss battle, some quite lengthy, that really puts your control savvy to the test. Keep a finger hovering over that shield trigger when a boss comes out to play… 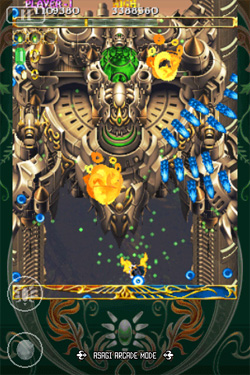 From an artistic standpoint, the game really stands out. The backdrops are very well done and the enemy craft objects are highly detailed. There’s so much color and graphical complexity onscreen — and zipping around at a breakneck clip — that it probably takes the smallest hit in running pixel-doubled on an iPad than any iPhone game I’ve seen. In fact, the larger screen image makes dodging enemy fire a bit easier than on the iPhone. The iPad is my personal platform of choice for this one.

A lively soundtrack featuring audio similar to other such Japanese shooters accompanies gameplay and adds to the overall feeling of intensity. (Cave released the game’s soundtrack on CD back in 2006.)

The iPhone version of Epsgaluda II features two modes of play. There’s the Arcade Mode, which stays close to the arcade original and the Xbox 360 version — but in the case of the latter, this has been a source of complaint for some, as far as the somewhat unclear scoring system. Cave addressed this by adding an iPhone Mode, which features a scoring system that the developers feel makes more sense for mobile play. As well, the iPhone Mode features a new Awakening Pulse attack where you can turn enemy fire into the green Spirit Stones that you want to collect, increasing your multiplier and protecting your ship at the same time. Across both of these modes are Novice, Normal, and Hard difficulty levels.

I am a particular shooter fan, but the bullet hell variety is not my very favorite flavor. Despite that, I fell quick and hard in love with Espgaluda II. It is easily the best 2D shooter experience in the App Store. I spent most of the day plowing through wave after wave of some of the most dense bullet swarms I’ve ever encountered and found it quite difficult to put down in order to start this review. I moved frequently between the iPhone 3GS and iPad to get a good feel for gameplay on both devices and it was fast-paced and frenetic fun, whichever device I used.

The game is currently listed at an introductory price of $4.99, down from the standard price of $8.99.