For more than a year now, CAVE has had a reputation of releasing high quality shooters on the App Store that featured hefty amounts of action, depth, and replay value. Their bullet hell shooters Espgaluda II [$11.99/Lite] and Dodonpachi Resurrection [$11.99/Lite] are two of the finest shooters around, and they proved they could translate their particular brand of manic gameplay to a more traditional action game with Mushihimesama Bug Panic [$6.99/Lite]. CAVE’s latest title, Deathsmiles [$11.99/Lite], furthers their reputation of offering top quality shmups and us yet another excellent shooter to add to our collection.

Like the aforementioned CAVE shooters, Deathsmiles consists of a mode that mimics the arcade version of the game as well as an iPhone-specific mode with exclusive features. The arcade mode features 4 different playable characters and 8 total stages to play. The underlying gameplay mechanics are fairly straightforward. Your character automatically fires, and a button in the bottom corner toggles firing to the left or right. There’s also a button to toggle between a regular shot and a laser shot, and a third button that performs a lock-on shot. 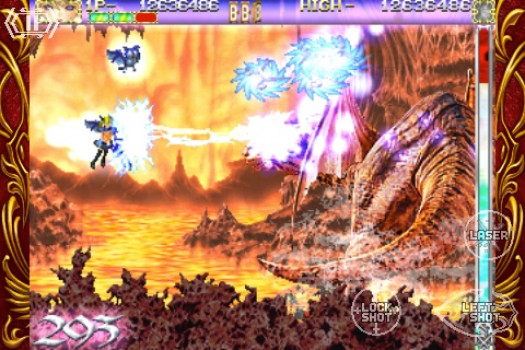 Enemies approach at a dizzying pace, and every level from start to finish you are constantly being bombarded by an assortment of awesome baddies in all shapes and sizes, as well as absolutely massive boss battles. Slain enemies will drop items which can be collected and go towards filling a counter in the lower left corner of the screen. When that counter reaches a thousand, you can activate a powered-up state that will give you increased firepower for the duration it takes the counter to return back to zero.

These base mechanics are pretty standard shmup stuff, but as with most CAVE games the real brilliance comes from the hidden depth in the scoring systems. Playing through Deathsmiles simply to complete the game is an exhilarating (if brief) experience, but players who want to score big and are looking for an extra challenge must take advantage of the many nuances to how enemies are killed and items are collected. If you want to take the game to the next level and really learn the ins and outs of the gameplay, our forum member ColdCoffee has put together this excellent detailed FAQ thread that explains pretty much all you need to know about arcade mode and scoring tricks. 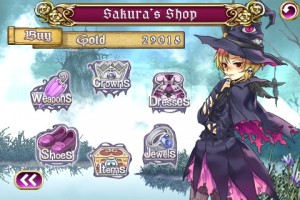 Then there’s the new iPhone mode which is similar to the arcade mode but is played with a brand new exclusive character that has an interesting alternate storyline. It also features a sweet weapon and equipment system that lets you customize your character with different items that have unique attributes. You can buy items from a shop in the game or collect them when they are randomly dropped by defeated enemies. The ability to collect items adds a very slight RPG element to the game, which is awesome, and your items and gold are carried over persistently to each new play of iPhone mode.

Just about the only flaw I have found with Deathsmiles isn’t something that’s the fault of the game itself, but rather it’s an inherent problem due to actually controlling the game right on the touch screen. It’s a horizontally scrolling game rather than a vertical one, and enemies come at your from both sides of the screen rather than just the top, so your character spends a lot of time right smack in the middle of the screen. This means that by nature of controlling your character with your thumb or finger, you’re going to be blocking a good amount of enemies and bullets that enter from the sides of the screen. It doesn’t entirely hinder the gameplay, and it’s manageable with some practice and experimenting with the 3 available screen sizes, but it’s really the only area where Deathsmiles falters and is worth noting.

If you can deal with the less than ideal control situation, Deathsmiles offers a just as robust and enjoyable shooter experience as their previous efforts, if not more so. On the easiest settings, the game can be enjoyed by even the biggest shmup newbie, but deeper below the surface lie advanced difficulties and complex scoring mechanics that will tax even hardcore veterans of the genre. Multiple characters and storylines as well as Game Center achievements and leaderboards ensure that Deathsmiles can be played over and over again for a long time to come.

So far, CAVE is 4 for 4 with top-notch game releases on the App Store. If you’re any sort of shmup fan then you’ll definitely want to at least try out the lite version of Deathsmiles, and if you do be sure to check out the scoring FAQ thread and the general discussion game thread in our forums to get the most out of the experience.