Did you ever wonder about what happened to your settlers after you finished a classic game of Oregon Trail (or the newer iOS remake)? Yeah, me neither. However, the folks over at Gameloft have taken that premise and used it to build a free-to-play town builder game. Set in the frontier wilds, The Oregon Trail: American Settler [Free] tasks you with building a new town from scratch. While many folks will no doubt be somewhat perturbed by this classic series going freemium, those that are willing to check it out will find a potentially decent game with more gameplay and content than similar titles (along with more annoyances).

Gameplay-wise American Settler generally plays like most other freemium town builders. Players chop trees for wood and grow crops for food with the intent of building houses and businesses to make cash. You then use that cash to build bigger and better businesses to make more coin, and so on. Each action rewards you with experience for leveling up, which subsequently unlock better things to build. Folks familiar with freemium building games should feel right at home. In addition, the visuals in American Settler are quite colorful and look very similar to those found in the recent iOS remake of the original Oregon Trail. In other words, if you were able to accept the cartoony graphics of the remake, you’ll be fine with American Settler. 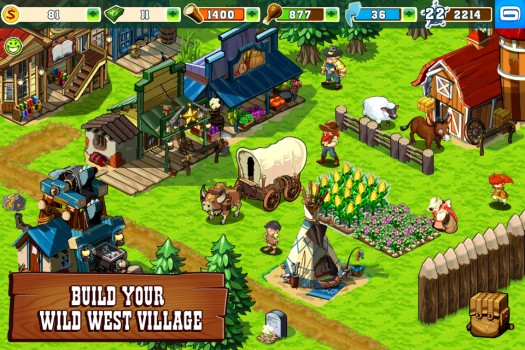 Where Gameloft somewhat deviates from the norm is with the sheer amount of things you can do simultaneously from the start. Being in the frontier, a lot of time will be spent clearing your plot of land and chopping down trees, which both earn experience among other items. Also, a lot of businesses will require base commodities (such as food) before they can eventually spit out gold. In addition, American Settler features a decent amount of crafting, with advanced items requiring simpler items (that can be made at the same workshop) and so on. I thought Gameloft did a decent job of the wide variety of items you could make, particularly with the interplay of items that could be used as prerequisite ingredients. 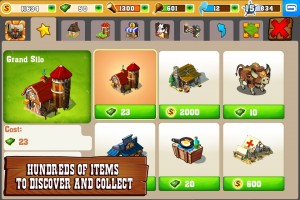 Gameplay and graphics are all well and good, but when it comes to freemium games, the most important question is in regards to how much can a person play before they have to wait or pay. Like most freemium games, American Settler has the usual assortment of timers that players will have to deal with in order to grow crops or craft items. Accompanying the timers is the usual ‘premium’ currency that can thwart said timers (and is conveniently offered as IAP). It’s a standard system that offers very little surprise.

However, Gameloft has taken timers one step further with the ‘Energy’ system. Similar to Let’s Golf 3, energy is required to do nearly anything in American Settler. While actions can randomly reward additional energy (thus giving you essentially a free act) you will eventually run out, and you will have to either wait, or use your premium currency to instantly restore your energy. While I’m certainly not a fan of additional timers, the truth is energy doesn’t really affect the game much outside the first few hours, as the gameplay will inevitably devolve into waiting decent amount of time for items or crops to be ready (and your energy will most likely have recovered by then).

Where I do have a problem, however, is with the randomized events that occasionally occur which threaten the timers of your businesses or crops unless you shell out some premium currency. It’s as if multiple timers and IAP were no longer enough and the developers had to throw in yet another method to try and coax IAP out of the common gamer. Sure, these events hide behind the general theme of Oregon Trail (bandit attacks and natural disasters, for example), but it still amounts to an uncouth business practice.

In the end, despite the colorful visuals and deeper gameplay, American Settler is still a freemium game. There are undoubtedly gamers out there that will simply turn their nose up and not bother simply because of that classification. However, for those that enjoy this type of genre, American Settler can offer enough actual content and gameplay to make it a freemium title worth pursuing. I just really wish that ideas like the random potentially timer resetting events and the energy ‘gameplay’ mechanic didn’t make the choice harder than it already had to be.