You don’t have to be an app hipster to be a little affronted when your favorite app hits the big time and everyone starts playing it. Really, are there many things more annoying than logging into Facebook only to see that your 11th grade lab partner has posted five hundred achievements from what was previously your favorite game? Instead of making passive aggressive comments on their status updates (“Wow, at least being unemployed gives you the opportunity to really master Angry Birds!”), channel that righteous anger into downloading Princess Punt [Free], a game that you are certain to be the first (and perhaps last) person on the block to be playing.

Before getting into the game itself, a warning is in order. There are plenty of things you will hate about this game. Endless popups after every level urging you to post every inane achievement to Facebook and Twitter, the out-of-place slot machine minigame that’s basically an in-app purchase cash grab, the agonizingly long loading times. Oh, and the eleven (eleven!!) in-game updates that have to download before you can begin (lord help you poor saps using a 3G connection to download them; wi-fi is definitely recommended!). Also, the default language is Japanese, so keep an eye out for the language options after installation—not that it really matters, because the loading screen text and tutorials don’t make any sense in English, either.

Long story short(ish): It’s confusing and difficult to get into. Why, then, is it worthy of a review? 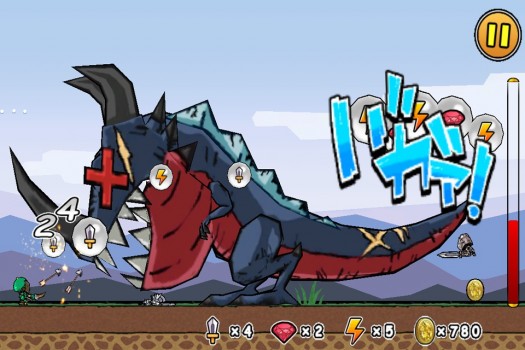 Because it’s incredibly, weirdly fun. It’s supremely beautiful, frustrating, and clever, much like the game’s namesake, the lovestruck and violent Princess Punt. It’s a physics puzzler, but it’s far and above the zillions of pick up and go titles in the App Store because of the sheer depth of the gameplay.

You control the Princess, who is on her way to meet up with her hunky boyfriend. The road is full of dangerous enemies, including dinosaurs(!!) and angry acorns (yes, such a thing exists). In order to get past these obstacles, you kick (or punt, if you will) bombs and, more importantly, your minions. 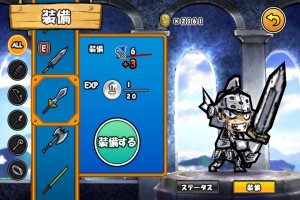 There are several royal minions to punt into the fray, all with different abilities. There’s a mage who shoots ice bolts and rains down fire, a centurion who knows his way around a spear (um, not in the ancient Greek way, sheesh), an archer who can shoot arrows from a safe distance, and your Hero (the primary minion who is by your side at all times, and may have a slight crush on the Princess) who has experience with a wide variety of weapons (the trident is my favorite!).

As you kick your minions into danger, their various abilities set in. The exciting thing here is that they stay in play even after you’ve kicked them, through the entire level, so there is a fairly major element of strategy involved. For example, if you send your archer in during your first kick and make sure he’s out of the enemies’ reach, he can bombard them with arrows the whole round, even after you’ve also sent in the Hero and a bomb or two.

After you’ve beaten a level, you get experience powerups that you can use to make the Hero’s abilities level up, making his weapons more powerful and allowing him to withstand more hits. Additionally, the mostly-bogus slot machine that pops up between successfully completed levels occasionally grants you new weapons for your other minions, meaning your mage can have an upgraded staff or your archer might get a new power attack.

That’s what makes Princess Punt so hard to put down, despite being difficult to get into at first. It’s a puzzle game that also happens to be an RPG, and while the combination might seem weird at first, after a round or two it’ll be hard to imagine playing a similar puzzle game that’s missing the added strategic elements of Princess Punt. And while the game might feel piecemeal at times, the sheer number of ways that you can play the game more than makes up for all the (eleven!!!!) in-game updates and unabashed pleas for in-app purchases.