The Let’s Golf series is no stranger on TouchArcade. We enjoyed Gameloft’s initial outing on iOS, and fell in love with the eventual sequel. Gameloft looked to continue this tradition of being the premier iOS arcade-style golf experience with Let’s Golf 3 [Free] while dabbling with the freemium model for the first time in the series.

The good news is that, at times, Let’s Golf 3 does manage to successfully marry a freemium structure with classic Let’s Golf gameplay. In addition, Gameloft manages to expand on everything we loved about the previous two titles and provide a ton of content to work towards. The bad news is that the framerate is extremely erratic and can become so choppy that it actually interrupts the gameplay and causes miscues.

For those of you that have played Let’s Golf 2, Let’s Golf 3 should look rather familiar. Again, there are 108 holes to play through spanning six visually gorgeous regions, and a wide variety of clothing and props for your character to wear, most of which change your golf attributes in some form. In addition, the classic Let’s Golf gameplay remains intact, with very little change to the core game mechanics. If you enjoyed playing through the previous games in the series, you’ll most likely enjoy Let’s Golf 3, as it’s essentially more of what made the previous games great. 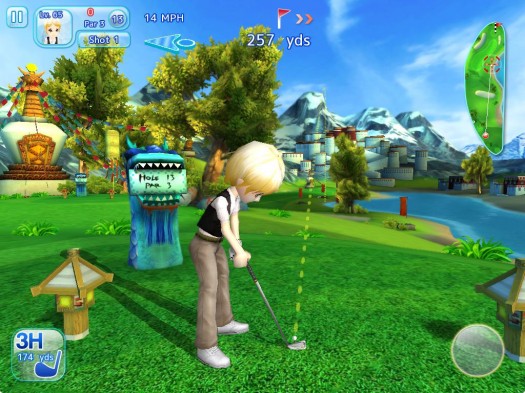 However, there are some major differences with this sequel, the most significant being the removal of set characters to choose from while playing. Instead, players are taken through a character creation screen upon launching the game for the first time. Let’s Golf 3 also incorporates an experiencing/leveling system for character progression, with experience being primarily earned by playing through holes. Also missing are the ‘super powers’ that were prevalent in Let’s Golf 2, although many of them return as disposable special golf balls that can be purchased in the freemium market.

For many fans of the series, the decision to move to a freemium model will most likely be the deciding factor as to whether they even bother playing Let’s Golf 3. While I think that overall Let’s Golf 3 does a decent job of implementing the freemium model, the fact remains that it’s still a freemium game and you’ll quickly get to a point where your choices are to wait or pay. Freemium is implemented with the ‘Energy’ currency, which is used every time you play a hole of golf. Energy can either be passively earned once an hour, or can be purchased with in-game ‘Cash’ (which in turn can be earned by playing well or bought with actual money). 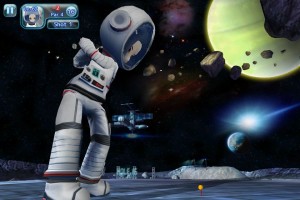 While I think that being able to earn cash (and thus, energy) by playing well is a good gameplay mechanic, the fact that you can only passively earn one unit of energy per hour is ridiculous. In other words, if you’re not that good at the game, you’re going to be punished rather harshly by either having to wait a long time for energy or shell out money to play.  Meanwhile, someone that’s better at the game might be able to play significantly longer (and level up faster) by earning more cash in-game and converting it to energy. I personally had no problem scoring birdies and earning enough cash and energy to continually play, but I just think that the energy cool down is way too long for most gamers. It’s definitely going to alienate a lot of players who simply don’t have any in-game cash and aren’t going to pay or wait an hour to play one hole.

Despite my concerns above, I’d be willing to overlook the freemium system if the rest of the game was top notch. Unfortunately, the framerate certainly prevents Let’s Golf 3 from reaching that point. Basically, the game will randomly stutter during both cutscenes and gameplay. It even occurs during the swing mechanic, which can in turn significantly impact play. Force quitting apps and hard restarting your iOS device does alleviate the problem, but eventually it comes back. Even more bizarre is the fact that this framerate issue is worse on the iPad 2 than the iPhone 4. Considering that each hole of golf costs precious energy to play, the fact the stuttering framerate can ruin a score becomes even more significant.

Let’s Golf 3 is an incredibly frustrating game to play. I still enjoy the core gameplay, and I absolutely love the custom characters and huge variety of things to buy for my character. However, the freemium mechanics and poor framerate just keep interrupting the experience that I know it can provide.  While I’m certain that the stuttering will eventually be fixed, it’s obvious that its freemium underpinnings are here to stay. It’s certainly become a topic of discussion on our forums. Whether or not that model makes the game worth investing time and effort into is a question that will have to be answered by each individual player.