Needing no introduction, Asteroids is one of those classic arcade games that everyone has played in some form or fashion. Atari looks to capitalize on that namesake with Asteroids GUNNER [Free], a modern upgrade to the Asteroids series which converts the game to a dual stick shooter complete with upgrades, unlockables, and IAP. While Asteroids GUNNER offers an adequate gameplay experience, the significant IAP barriers raises some questions as to whether the game is worth a significant play through.

Gameplay-wise, Asteroids GUNNER plays similarly to Space Miner with dual-stick controls instead of thrust-based movement.  Interestingly enough, Space Miner plays closer to classic Asteroids than Asteroids Gunner does. Everything from the controls to the plethora of asteroids to even the ability to customize your ships should feel familiar to any veterans of this genre. In fact, Asteroids’ main problem is that it all seems a bit too familiar – the game does very little to differentiate itself from the pack in any aspects. However, as far as the basic gameplay goes, Asteroids GUNNER does hit all the notes, and doesn’t do anything to detract from the generic dual stick shooter experience. 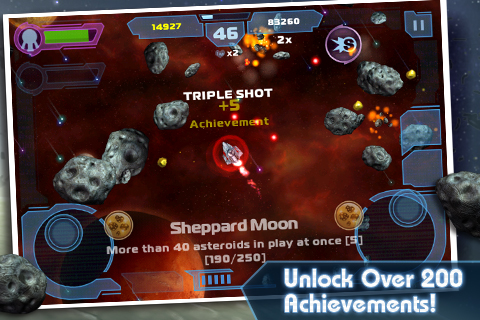 Despite these similarities, there are some differences. For one, the narrative in Asteroids GUNNER is non-existent; the game is divided into levels, and the goal is always the same, take out all the asteroids in each respective level as fast as possible with score bonuses for not damaging your ship. While I’m not going to ding an Asteroids game too hard for its lack of story, folks looking for a narrative shooter more akin to what is typically found on the App Store will probably be disappointed.

In addition, while Asteroids GUNNER has several currencies that can be collected (or bought with IAP) for upgrades, the main focus seems to be centered on achieving high scores. The main game mode provides you with a few lives with the goal being to score as many points as possible before losing them all. Also, quite a few of the ship upgrades available are based around increasing score multipliers (and nothing else). The emphasis on scoring appears to be one of the few throwbacks to classic Asteroids gameplay, but it just seems out of place when the rest of the game is focused on currency collection and upgrades.

One of the ‘modern’ upgrades to the Asteroid gameplay found in Asteroids GUNNER is the incorporation of freemium and IAP elements. Unfortunately, I just don’t think a lot of the freemium portions were incorporated well. While the first ship and first world are available free to all players, each subsequent world and different ship requires ‘Space Bucks’ to unlock. Space Bucks cannot be earned while playing the game – they can only be purchased as IAP.

This is a game design decision that I just don’t agree with; freemium games should allow players to unlock all or most of the content by putting in enough hours in the game. The primary gold currency used for upgrading your ships and powerups is earned perpetually during play and can also be purchased as IAP, which is how I feel the previously mentioned unlocks should have been addressed. As it stands, restricting a whole 2/3rds of the game to IAP just seems a bit extreme and is going to turn off a lot of gamers.

Asteroids GUNNER is somewhat of an awkward game to recommend. While the game itself is free and a decent portion of the gameplay is available to peruse, you’re going to have to spend some cash to unlock a majority of the content. Unfortunately, the lack of anything to differentiate itself from the rest of the dual-stick shooters means that there’s a good chance that you won’t bother with unlocking all the content. If you’re looking for a quick-fix in the dual stick shooter genre, check out Asteroids GUNNER. However, if you’re the sort of gamer that is a completionist, stay away from this new Asteroids, as the IAP barrier is just not worth it.