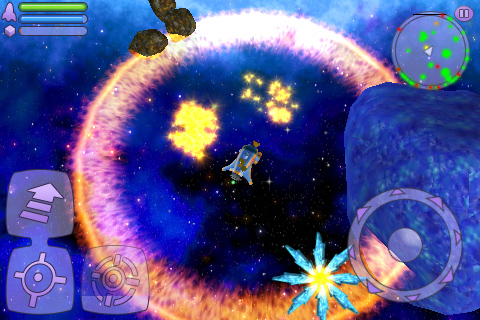 Every now and then a game comes along that just dazzles and blows you away by getting things exactly right. Such a game was released into the App Store yesterday by Venan Entertainment.  That game is Space Miner: Space Ore Bust [App Store].  In short, it’s Asteroids meets the RPG. But that description really doesn’t do the game justice. 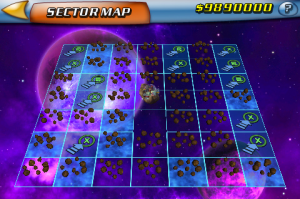 Space Miner places you in the role of the nephew of good ole’ Uncle Jebediah Gritstone, proprietor of the galactic Gritstone Mining Station. Uncle Jeb has hired you on to help with the ore mining and it’s with much excitement that you make your way to his mining station in your veritable space jalopy. Once on board, things get complicated (it’s a long story, enjoy it in-game) and Uncle Jeb is desperately counting on you to go out into the neighboring sectors, blast asteroids, and bring back the precious ore contained within. The more ore you collect, the bigger your cut of the profits. But the pitiful ship you start off with is hardly up to the task.

As you accumulate profits, the money can be spent in Uncle Jeb’s shop, where more powerful ships, weapons, shields, ore collectors, power plants, and the like can be purchased. It doesn’t take long to find yourself sitting in a decent ship with multiple ore blasters, a sizable cargo bay, and an ore collector that can get the job done. And the whole package is done up with a great deal of spot-on humorous dialog and even an amusing banjo-based audio track that fits ole’ Uncle Jeb’s operation to a T. (There’s no doubt that he’s got a still hidden somewhere on that rock of his.) 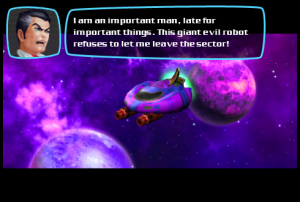 Now, with all the heavy RPG aspects and the well done comedy, you might think the game is light on shooter action when it comes to dealing with those asteroids. Happily, that’s not at all the case. The asteroid combat system is an example of shooter gold — for an Asteroids-like experience, it really couldn’t be any better. And it’s not just asteroids you’re fighting. There are competing robot miners bent on stealing your ore that must be dealt with. Not to mention the occasional encounter with the daunting gasteroids… (Yea, they’re about as bad as they sound.)

Aside from the standard goal of blasting asteroids to mine ore, there are a total of 24 missions to complete, such as rescuing helpless tourists floating through space (think Dave Pool), destroying a massive robot enemy in order to save a heartless CEO, and the like. There really is an impressive degree of gameplay variation here that just keeps things moving. In my experience, you really have to be careful not to lose track of time while playing this one. “Hard to put down" understates it.

See the developer’s game trailer for a look at the action.

Space Miner: Space Ore Bust really is an App Store gem, given the unusually broad appeal I feel surrounds the title. Shooter fans definitely have a lot to be excited about, as do RPG fans — but even those that usually find themselves impatient in an RPG setting should enjoy Space Miner. The RPG layer is not only light, but easily manageable and delivered with a healthy dose of humor. It strikes a balance between two different gaming styles — shooter and RPG — like I’ve not experienced since playing Activision’s Battle Zone, which married action and real-time strategy with similar elegance. Without a question, this is one of the best games I’ve played since the App Store went live over a year and a half ago. And you don’t need to take my word for it; our forum readers are going nuts over this one.

Whatever sort of gamer you are, don’t miss Space Miner: Space Ore Bust.