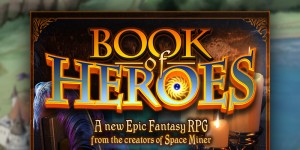 We’re massive fans of Venan Entertainment, so much so that if I was into tattoos I’d probably have the Venan logo somewhere in my inevitable video game themed full sleeve, back collage, or somewhere else. Anyway, they’re responsible for Space Miner which was our iPhone Game of the Year last year. Unfortunately, even though we went nuts over the game it didn’t achieve the kind of commercial success it needed, which seems to be a similar sad song we hear with way too many great iOS games. So, while a potential sequel has been relegated to the Venan back burner, Venan has been full steam ahead on their free to play RPG Book of Heroes.

These kind of free to play RPG’s can be a little difficult to get excited about, especially as more and more developers hop on the free to play bandwagon… But, Venan being attached to it definitely caught our eye and we’ll be giving it a once over to prepare for its US launch in the not too distant future. For more details, check out the thread on our forums, and if you’re a customer of the Canada, UK, or New Zealand App Store, you can download the game right now.