By now, pretty much everybody is aware of the utter glut of dual-stick shooters that have arrived in the App Store over the past several years. I’m not saying that it’s necessarily a bad thing, as the formula does lend itself quite well to the touch screen environment. But like any genre, excessive releases can diminish the enthusiasm towards new titles. There are some truly excellent dual-stick shooters out there, and some truly awful ones, and a whole bunch of forgettable titles that fall in-between.

One of the truly excellent ones, and one that has lived a long and happy life on my iPhone since its release, is Aftermath [$1.99] from developer TwoHeads Games. This game has always seemed to kind of fly under the radar, though we did review it when it came out, but it definitely deserves some special recognition for doing several unique things that set it apart from the masses of other dual-stick shooters out there. 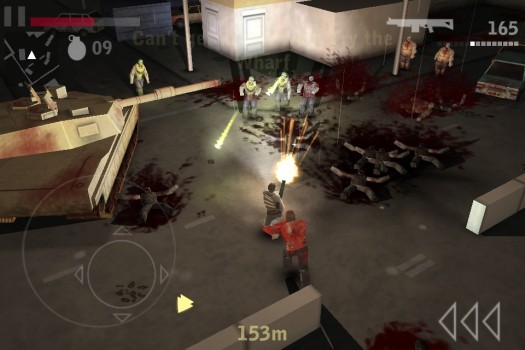 My favorite thing about Aftermath is the creepiness factor. You play as a survivor trying to escape a city infested with zombies, which is certainly cliché by now but Aftermath pulls it off with style. The entire city is dark and rainy, and you can barely see anything save for what you’re able to illuminate with your flashlight. Occasionally a flash of lightening will light up the screen, allowing you to catch a quick glimpse of the various zombies strewn about the map, ready to attack. The lighting effects are really impressive, and together with some eery music and sound effects, Aftermath creates one of the best horror atmospheres around. 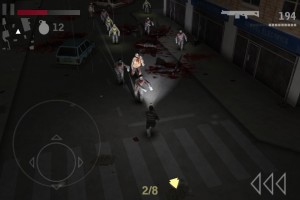 Besides the chilling mood that permeates Aftermath, the gameplay is also decidedly different than your average dual-stick affair. Rather than just a boxed in arena where you’re constantly backpedaling in circles, blasting away at a horde of approaching enemies, Aftermath features a fairly expansive city that is broken up into levels for the game’s campaign. This means there’s a lot more variety to the environment, and thus different types of strategies will need to be used to keep the zombies at bay.

So, in case you were unaware, Aftermath is pretty freaking awesome. The reason I’m bringing this up now, however, is because the game received a surprisingly meaty update last week that’s well worth noting. First off, the game now features Retina Display graphics, with redone character models, higher resolution textures, and improved graphical effects. Basically, Aftermath is looking razor sharp now. Additionally, a brightness control has been added to the options. The game is intended to be dark and creepy, but it’s a nice option to have in case you’re not in an ideal lighting situation and are having a hard time seeing the screen. Or if you’re a fraidy cat who’s scared of the dark. It’s ok, I won’t judge you.

Next you have the addition of 5 brand new levels to the game, which effectively increase the size of the overall city by 50%. This is good news as one of our chief complaints with the game originally was that it was pretty short. These new levels flesh things out nicely, and there is still the survival level which offers endless replay value as well. There’s also a new overview map and an especially helpful onscreen mini-map to help you navigate around the dark city.

The final big improvement in Aftermath is an optional new control scheme. This effectively takes away the right analog stick and instead gives you the entire screen to turn and aim. I have to say, I like this control scheme a whole lot better. It just feels better, and in the heat of zombie battle you don’t need to worry about if you’ve got your hands positioned correctly or anything, as the whole screen is the control. You might prefer the traditional dual-stick setup, but the new option is definitely worth checking out.

There’s really nothing I love more than when an older game gets a big update to rekindle my interest. Especially a game that is pushing two years old. Besides what was in this latest update, the developer sounds like he has some iPad plans brewing too, and we may see something on that front by the holidays. Hopefully this latest update will get more people to take a look at Aftermath who weren’t familiar with it before. If you like dual-stick shooters and are looking for something that offers more than your average arena survival gameplay, definitely give Aftermath a try.