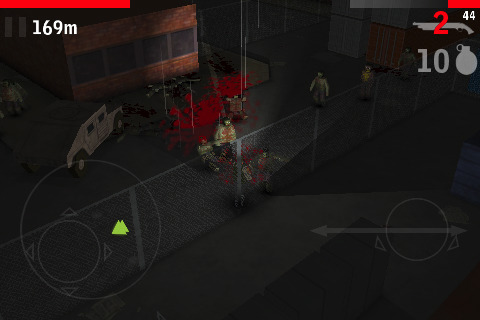 In many ways Aftermath is the zombie shooter I’ve been waiting for.

You find yourself walking the streets at night of a zombie infestation, trying to fight your way out of the city. It’s dark and raining. The entire scene is dark with the exception of your flashlight. You move around frantically trying to take out the incoming zombies when a flash of lighting reveals a horde of them right behind you.

The mood of the game really is perfect. The lighting effects, 3d engine and sound come together to give Aftermath a great feel. Your character is controlled by two thumb pads, but not in the traditional dual-stick format. Left is movement while the right one lets you turn left/right. Meanwhile, firing at zombies is automatic when you point at them with your flashlight. While this may sound awkward, it works quite well and makes the game feel a bit more realistic and frantic as you must be facing your opponents to fire at them.

Another aspect of the game that really stood out was the large city map in which the levels take place. There are blind alleys, cars, and buildings. You need to navigate your way around parts of the city to make your way through the level goals. This is a refreshing change from other dual stick shooters such as Alive 4 Ever which have all taken place in small square-shaped arenas. In Aftermath, you really feel like you are getting lost in the city.

Check out the video for the gameplay:

The game, however, only comes with an 8 level story mode and a final survival mode, but is integrated with OpenFeint for high score achievements.

While there is some replay value in the existing story levels to improve your score (and, of course, the survival mode), the main criticism about the game is this relatively short level structure. The early levels can go by really quickly and leave you wanting for more.

Still, it’s hard to find too much fault in the game at only $0.99 when other games launch with much less. If you’re looking for an atmospheric zombie shooter, this one’s an easy recommendation.