The developers at ustwo™ have unleashed their first full-fledged entry into the gaming category on the App Store in the form of Whale Trail [99¢]. Taking the simple mechanics from the popular cave-flying genre and wrapping them up in gobs of top-notch style and presentation, Whale Trail offers an experience that is practically like nothing else currently available on the iOS platform.

We took a fairly extensive look at the ins and outs of Whale Trail during our hands-on preview from earlier this month, so be sure to give that a look for even more details. But to reiterate, Whale Trail employs cave-flying mechanics, where touching the screen causes protagonist Willow the Whale to rise into the sky, and letting go drops him down. You must use this to avoid the evil dark clouds in the sky, which will only increase in numbers the farther you travel. 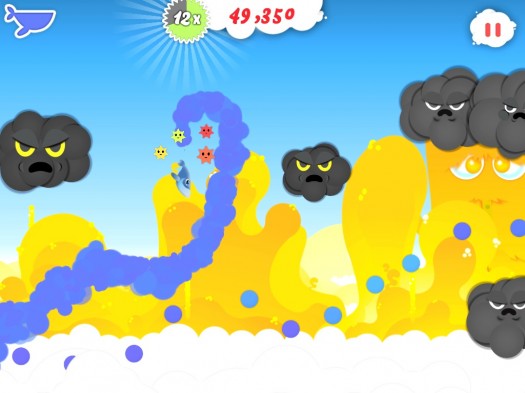 Keeping you afloat (because as you can imagine, whales can’t inherently fly in the sky) is your magical rainbow trail that flows from behind Willow. Your trail is constantly running out, but you can keep it energized by collecting the many colorful lines of bubbles that are laid out in your path in the sky. The dark clouds will cause your trail to evaporate at a rapid rate as well, and an errant turn into a group of clouds can end your run quite suddenly if you aren’t careful.

Adding some complexity to the fairly basic cave flying is a multiplier system tied into the scoring. Collecting bubbles will fill a meter that increases your multiplier which in turn exponentially increases the points earned by picking up bubbles. Running into a cloud will drop this multiplier down a level, forcing you to refill the meter to get it back to where it was and giving you yet another reason to avoid the clouds. 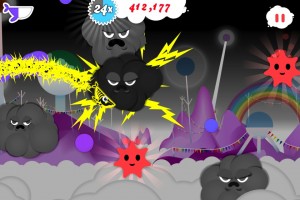 Other gameplay elements include the ability to do a loop the loop, which can be necessary to follow the trail of bubbles, but can also totally throw off your rhythm; and boost swirls, which will propel your forward in a quick burst and can get you higher into the sky to collect out of the way rewards, but can also make Willow more difficult to control.

Finally, stars can be collected along your journey and getting enough of them will send Willow into a state of temporary invincibility. During this time, a large invisible aura surrounds Willow which will grab bubbles even if he isn’t touching them, making it much easier to grab them all. Also, you can blast straight through clouds while invincible, and these give off a huge point bonus. A spell of invincibility coupled with a particularly high multiplier is key to earning the type of huge scores that will make you stand out on the Game Center leaderboards.

The gameplay in Whale Trail is simplistic but with subtle strategies, and really nails the type of hooks that keep you wanting to play over and over again to improve both your skills and your score. About the only thing I don’t like is that a run can take a pretty long time to complete, and the difficulty ramps up a bit too slowly. These are easy things to forgive, but some sort of quick play option that throws you right into the heat of the later parts of the game might be a neat addition.

However, beyond the solid gameplay, what stands out the most about Whale Trail is the stellar presentation. Bursting with color, whimsy, and downright bizarreness, the visuals in Whale Trail are like a psychedelic trip for your eyes and ears. It’s the type of game I imagine Dr. Timothy Leary and company could have dreamt up at Millbrook back in the 60s. It’s straight up wild, man.

But besides being like a freaky LSD trip, Whale Trail is also very endearing. It’s the sort of game that just makes you happy when you play it, even if you can’t explain why. Willow is adorable as a main character, and you find yourself rooting for him to succeed, and trying extra hard to avoid clouds so that he doesn’t get zapped by them. The excellent folky soundtrack complements the visuals perfectly, and everything just comes together as a cohesive experience.

Whale Trail contains all the components of a hit iOS game – colorful visuals, catchy music, a cute main character, and gameplay that’s easy for anybody to pick up but hard to master. But somehow, it manages to not feel forced or contrived, and instead sticks out as something wholly unique from anything else out there. It’s an experience as much as it is a fun game to play, and for the low price of entry you shouldn’t hesitate to turn on, tune in, and drop out to Whale Trail.