A young man washes up on shore without knowledge of where he is or how he got there. An elder teaches him swordplay and sets him off on an epic quest. A small blue blob that lives on his arm breaks the fourth wall at every opportunity.

This was almost the set up of any classic role-playing game, a fact that Pixel and Texel’s Fara [$0.99] is happy to point out. With tongue firmly in cheek, the action RPG leads players through most of the cliches of the genre — fetch quests, boss battles and awkward romantic subplots, among others — though it never quite transcends those cliches itself.

Fara falls into the simplest category of action RPG. There is no leveling system, no loot, no snazzy gear to equip. There are two extra skills you’ll find over the course of the game, and they serve mostly to give you access to new areas, Legend of Zelda style. 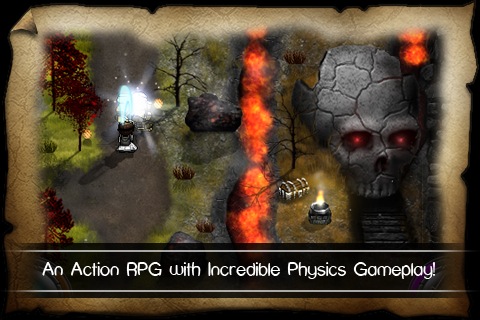 The game sends you hither and yon to solve problems for villagers, slay enemies in your way and collect hidden treasure. Some of this serves your ultimate quest, but you’re never quite sure what that will be until you reach its last few steps. Still, the journey is entertaining enough. Hacking and slashing your way through the mysterious island is old-school fun, the villagers you meet are quick witted and funny, and finding treasure tucked away in some dark corner is always a good time.

Alas, the controls are not so friendly. Fara offers two control styles, a virtual stick and touch controls that use a combination of swiping and dragging. The former is better, but will get you in trouble in tight spots. And tight spots there are aplenty. I’m not sure what’s meant to be fun in providing imprecise controls and then putting deadly spikes and gas all over some rooms, but I certainly didn’t find it.

You know how some RPGs have the sewer section, or some equally unfun area that seems designed as an exercise in tedium? Fara trumps them with its tilt sections. Whenever you pick up a shield powerup or use the shield ability the game switches to tilt controls. This lets you get through the aforementioned hazards, but good luck being precise when you have to change the orientation of your phone while on a time limit in a hazardous area with poorly defined boundaries. It’s a frustrating and entirely unnecessary inclusion.

At least death isn’t much of a setback. The only penalty for dying is that you get sent back to the start of the area you’re in, and you rise up the leaderboard that tracks the number of deaths each player suffers. There are also leaderboards for kills and gold collection, and achievements that are mostly awarded for completionism.

Completing every last bit of Fara will only take a few hours, and that includes earning all the achievements. It’s the perfect length, really – enough time to feel your quest is sufficiently large without dragging on or backtracking too often. The game would be better for short bits of play if it had a better map, but it’s rarely all that difficult to figure out where you’re meant to be going.

Ultimately, Fara falls prey to more RPG cliches than it mocks. It’s ambitious, and not overly-so, but it’s neither unique enough or successful enough to stand out from other games in the action RPG genre. Still, if you’re looking for a short jaunt through the fantasy wilds, it’s hardly a bad choice. It just isn’t a particularly inspiring one.