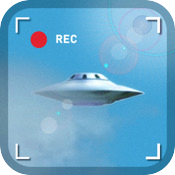 We thought we’d seen the peak of innovation this week when ARDefender showed just how an augmented reality game should be made. Revolutionary Concepts and indie developer Nicolai Troshinsky had other ideas though, and have delivered something truly…well, revolutionary. If Augmented Reality is the idea of superimposing a game world onto your real world, then what has been done in UFO on Tape [App Store] can only be described as Transplanted Reality— a window into another world right in your hands.

UFO on Tape is a straightforward concept delivered in the most captivating way. It starts by showing you a re-created view of an iPhone camera (no actual use of the camera is ever made), as if it were pointed out the window of a car. Your girlfriend next to you then tells you that she’s seen something strange in the sky. With your camera, you zoom in on the object, only to discover it is in fact, a UFO. As it darts around the sky and weaves amongst buildings, your task is to keep the zippy UFO firmly locked in your sights. 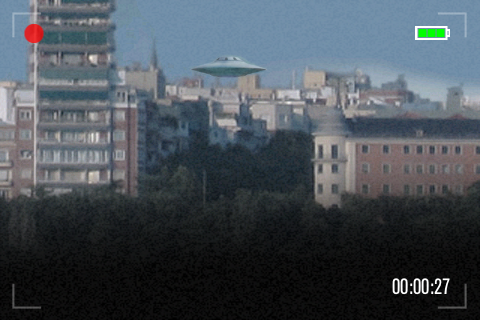 UFO on Tape delivers its incredible realism in two ways– firstly, through a pixel-perfect, photo-realistic representation of a video reel; and secondly, through the use of the iPhone 4’s gyroscope, or if unavailable, the accelerometer. These two mechanics go hand in hand to make it actually seem as if you are controlling a camera phone and pointing it at something in the sky, all while looking through its viewfinder.

Naturally, use of the gyroscope is preferred, as it allows you to orient yourself to the ground and move the camera around as if it were actually in your hand, giving the most accurate experience. That’s not to take anything away from the accelerometer though, as both functioned well to deliver similar results (if less dramatic on the older devices).

The game itself is extraordinarily simple, but also very challenging. The pesky UFO seems aware of your attentions, darting backwards and forwards at varying heights– frequently trying to lose you amidst the tops of buildings. Not only that, but it occasionally darts into your peripheral vision too, which is restricted by the blur of the outline of your car window. Explaining this in words is already doing it an injustice, but it is the most amazing thing to witness your game world restricted by something as routine as the view out your car window. 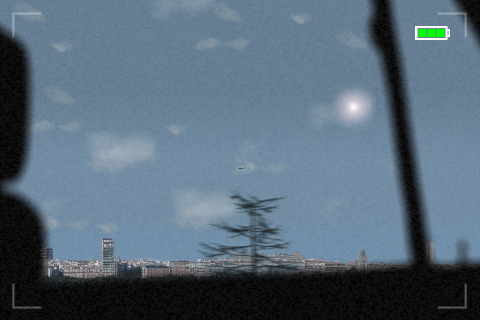 The entire experience is further enhanced by the interaction with your girlfriend. As you hone in on the flying saucer she’ll make all kinds of comments; ranging from stunned disbelief to utter dismay if you happen to lose your target. If it does get away, she’ll quickly start barking orders trying to direct you in the way it seems to have gone. Her fully voiced lines flow seamlessly are surprisingly plentiful– in the 30 or so games I played, I was frequently surprised by the new comments that pop up, there are that many. The dressing down she gives you from time to time– “You idiot! You lost it!"– and certain other memorable comments never tire, either.

The ambiance in UFO on Tape also deserves a special mention, as it has been meticulously crafted to such a degree of accuracy that it almost goes unnoticed, as it does when you’re really driving. If you do hone in on it though (headphones help), you’ll notice the sounds of the city behind you, from the purr of your own engine, to passing cars, sirens in the background and even the tick-tick of your turn signals as the car presumably negotiates the streets to afford you the best view. A creepy, X-Files like soundtrack really underlines the excellent audio work in UFO on Tape.

UFO on Tape is a singular experience, not for its dramatic level of content and replayability– in fact, the game itself is quite basic, with a standard high score table recorded on Game Center– but for the immense attention to detail needed to successfully bring its world alive in the palm of your hand. The true-to-life look, sounds and handling all come together to deliver something really special that simply must be played to be believed. We’re telling you now, screenshots do not do this game justice, so get out and grab UFO on Tape pronto if this review has even piqued your interest in the slightest.