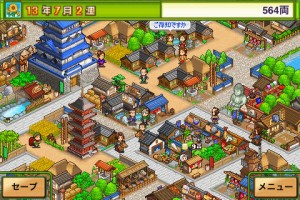 On the heels of another great release in Grand Prix Story [$2.99], the simulation gurus at Kairosoft have dropped its SimCity-lite offering, Edo Town, in the Japanese App Store. Putting English-based speculation on the back-burner for a moment, Edo Town has you play the role of a city manager charged with putting together a thriving town complete with businesses, facilities, and utilities. No doubt, you’ll have to walk the line between citizen happiness and overall revenue, which can make for some compelling play, as Maxis has proven time and time again.

Now, for the tea leaves — if Kairosoft keeps up with its current model, there’s a good chance we could see an English version of Edo Town as early as next month. If this happens, Edo Town would be the studio’s next US release following it’s racing simulation game. Localization is not an easy process and Kairosoft has said before that it has a special release schedule for the rest of the world, however, so let’s keep anticipation in check for the moment.

For what it’s worth, we’re doing our best to independently confirm if we’ll see Edo Town in English. We’ll definitely bring those details when or if we get them.