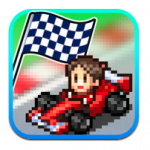 Kairosoft’s Grand Prix Story [$2.99] feels more like Game Dev Story [$3.99 / Lite] than any of the other studio’s subsequent releases following the launch of the overly-cutesy and absorbing simulation game about making games. In both games, there’s a lot of overhead before you can see any practical applications or meaningful progress. There are also a ton of hidden systems and mechanics to find and discover as the game moves you along with its forty foot stick with a dangling carrot on the end. Also, in both games your race to be the best is often determined by the time you put in being the worst. You have to click with and then master both games’ mechanics in order to see profit and, yeah, that can be a tall order for mobile.

Grand Prix Story specifically is a painfully slow-burning simulation with a familiar set of problems that plague almost every Kairosoft release — lack of feedback, too many hidden or unexplained systems or mechanics, a bad tutorial, and a steep difficulty curve — but it’s also a fun title that hits all the notes that it needs to. Its systems are deep and defined enough, the racing is oddly entertaining even though its just a conglomeration of dice rolls, it’s burst-y, and the overall atmosphere, action, and theme play well off each other. 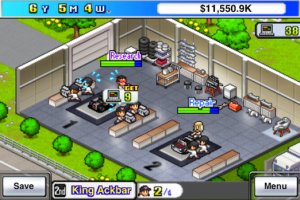 In the game, you’ll play the manager of several racing teams. You’ll never strap into a car, but you’ll make them and research them, tune parts and find new ones, set up and cancel a conga line of lucrative sponsorships, and subtly guide your guys to victory by putting all the materials and constituent parts of the simulation into your cars. It’s a bit heady, but once you put in a couple of hours, you’ll quickly grasp all the concepts. I realize that we all can’t spend our lives indebted to Kairosoft though, so if time is an issue, this isn’t the game for you at all.

At first, you’ll be given a single car and a few races to compete in. You’ll need to hire mechanics to fix your car, contract a driver, add new parts, and discover research points while racing this vehicle. There are tons of cars to build and even more parts to apply to your car, most of which have standard “you get this, but you lose a bit of this” stat-lines. Interestingly, Grand Prix Story sets itself up for you to compete against the simulation; by increasing the parameters of your driver, mechanics, and your parts, you’ll receive way better performance results from a car and in races. 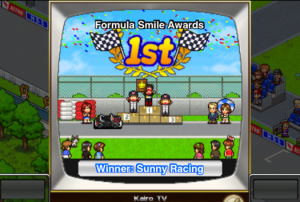 There are no actual racing mechanics — when you enter into a race, you simply watch how your driver and car perform… over and over and over and over again. It’s really quite mind-numbing to watch hundreds of of races over the haul of the experience, yet there’s something oddly compelling about each outing. Hilariously, I’m personally connecting with my team and my cars and I want to see races through regardless of the outcome. I know that’s cheesy, but when you spend hours and hours of time beefing up team members, vehicles, and individual parts, there’s a certain thrill in seeing the fruits of your labor in motion.

It’s important to note that you’ll randomly earn research points as you race. And as you place higher and higher, you’ll earn more points with sponsorships. After enough of the latter, you’ll receive new parts and new sponsorships, as well as a little side-dough to spend on better drivers and better team members. 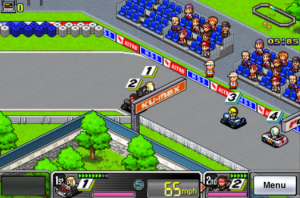 “Team” is the most interesting concept introduced in Grand Prix Story. You’ll eventually get to control several and you’ll have to babysit all of them. Eventually, you’ll be able to race a handful of cars at once, ratcheting up your potential to earn research and extra cash in a single race. Once a year in the simulation, you’ll participate in the Grand Prix, which is a series of races. When you conquer it, you’ll get a chance to upgrade your garage and give yourself even more to do.

Aside from the frustration of having to wait and watch for most of the game’s finer points of its simulation — and that might be more a result of the reviewing process than anything else — I’ve been having a positive and good time with Grand Prix Story. Sadly, for those of you who really like fancy outros with big and impactful things to bear, Grand Prix Story has been entertaining me for the exact same reasons that Game Dev Story did. It’s a sharp simulation with a ton of systems to look at, use, and then abuse wrapped up in a playful and cutesy little package. It’s great on the go, fun to play regardless, and a neat little break from the studio’s more recent games. I recommend it.