I can’t help but want to think that Calibre Games’ Hunger Calls [99¢ / HD] is meant as a metaphor for fast food culture. The purpose of the game is to shove as much food into people’s mouths as you can, as quickly as possible, then after they overeat, you have to either hit them with some Alka-Seltzer or they die.

At first, I thought Hunger Calls was just going to be some kind of resource management game in the vein of Diner Dash, then after a few minutes, I was worried it might be a clone of the Flash game, Sweatshop, but it’s neither — the only way I can think to describe Hunger Calls is as a reverse tower defense game. 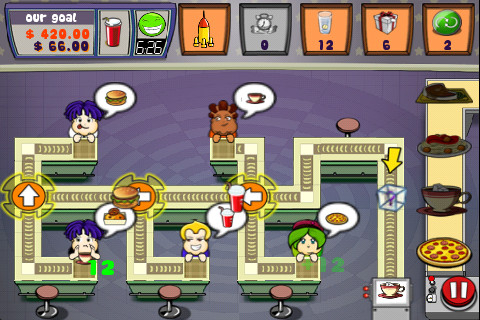 The premise is that you need to get food to people by manipulating the direction of a conveyer belt. You swipe your finger across an arrow to change the belt’s direction and you need to deliver the correct food to the right patron. They will continue to sit there eating until they start to turn green and they need some Alka-Seltzer. They literally gorge on what you send them until they’re sick and in need of help and if you don’t help them, either out of conceited spite, or because you can’t, they die.

I didn’t want to help these people. I wanted them to die right there because they sat there and ate a burger followed by a soda followed by a pizza. It was disgusting and I didn’t think they needed saving. But, if two of your patrons die, you have to start over, so for the interest of the game and the overall success of my apparently soulless restaurant, I keep feeding them.

You feed them until you make a certain amount of money, then you close up shop for the day, just like one of those obnoxious restaurants in small neighborhoods that don’t have hours posted on the door. The amount of money you make off each sale depends on how quickly you serve them and how much you’ve upgrades the “tastiness" of that meal. There’s a time limit on each level, but I never got close in any of the 39 levels to running out of time. 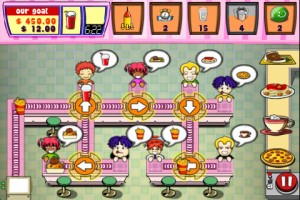 That’s the bulk of the game, but as you move on, you get access to more food to serve out and you can upgrade your food and your restaurant. I don’t think upgrading your restaurant actually does anything, but it seems like upgrading your food makes it worth more money. There are power-ups as well, where you can gift your denizens, slow down and speed up time. Gifting is handy if you’ve screwed up a bunch of order because it resets everyone, and the speed power-up can help you get that burger into the hands of a pissed off person before they storm out.

The feeling of reverse tower defense comes from the fact you’re essentially playing on a small, predefined area with limited paths to a destination. Just imagine if in Anomaly: Warzone if you had to deliver specific goods to one section instead of having a certain type of unit. You have to change the direction of your conveyer belt to keep up with the food churning out of it and it quickly becomes challenging and overwhelming.

I can’t exactly say what compelled me to play through Hunger Calls in its entirety. The look and feel of it screams cheap Flash game, but something about it makes it difficult to walk away from it. You put the game down for a few moments and suddenly want more. You want to continue shoving food down the throats of these people until they explode and die, then send a “revive" pill over so you can continue on with your business.

I’ve never had any desire to work in a fast food restaurant because this is how I imagine it actually being. –total chaos while one customer is nearly dead and the one next to him is complaining about not getting his burger yet. It’s awful, addicting and worst of all, you stop caring about the health and well being of your patrons and just want to make enough money to finish the day.