Globulos Mania [Free] might look a bit familiar. It’s built off a very popular free-to-play web game and seems to contain the same content as Globulos Party on DSiware. Haven’t played either? Then you’ll want to give this one a shot. It’s a simple competitive game that’s positively oozing with content. And, frankly, it’s a lot of fun.

A caveat, however: you’ll want to try this game before investing in its premium offerings. Globulos Mania is an exceedingly simple game. In each of its 20 modes, you’ll find yourself doing the same thing. You aim your globulos by pulling a line out from them in the direction you want to travel. At the same time your opponent will aim his. You’ll press the Go button, and you’ll watch the turn play out. You’ll repeat this until one of you achieves whatever goal has been set before you. If you find that fun then by all means, pay and play more. If it’s starting to wear on you by the time you’ve played through the free content, you’ll want to stop there. The many modes offer a startling amount of variety, but Globulos Mania lives and dies by that single mechanic. 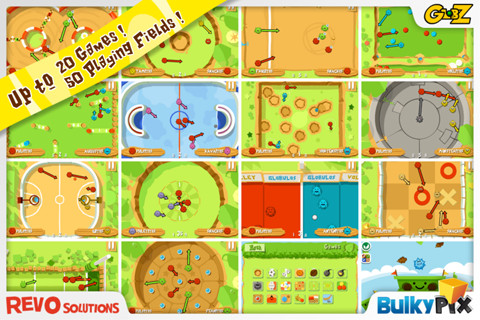 What can you do within the confines of that mechanic? Quite a few things, as it turns out. You can play all manner of sports, or games like darts, croquet or tic-tac-toe. You can race. You can play king-of-the-hill or sumo fight. You can dodge bombs. About the only things you won’t find amongst the game’s modes are death match and capture-the-flag.

The free-to-play model in Globulos Mania is almost perfect. In its cost-free form, the game offers up four minigames. You can play them for a taste of the action, decide if you like the gameplay, and then choose whether or not to make a purchase. Almost any purchase will remove the banner ads, if that’s a concern for you. Normally I’d also like the way the game divides its IAP into easily digested packages, but here I consider it a misstep. Partly because the way the packs are presented is overwhelming at best. But more so because this is a multiplayer game, and finding a match requires you and your opponent to share the same modes. 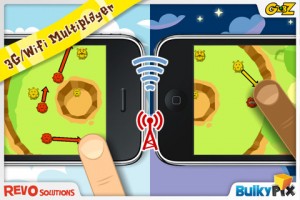 This leads to the little problem of a splintered community. If you only want to play the modes in, say, the Pub Pack but none of your potential opponents have it, you’re out of luck. In practical terms, this means much of the online multiplayer is going to be played on those four free modes. Hope you like them.

If, on the other hand, you’re really into the single player or you have someone to play with (on either one device or two — this game is all about options), go for the Premium Pack at $4.99. It contains all the various modes, most of which are great fun, the ability to save replays and the ability to customize your globulos. If the asking price is too steep and you’d rather buy piecemeal packs, I’d skip the Sports Pack. While most of the packs offer a variety of different play styles, all the modes in the Sports Pack pretty much boil down to putting a ball in the opposing goal without dropping your globulos into the goal with it. Hockey and football may be nuanced games in real life, but in Globulos Mania they’re functionally very similar.

If 20 modes doesn’t sound like enough content, the game has you covered. Each mode has multiple fields you can play on for different challenges, and multiple difficulty levels. These range from AI so dumb it will launch its globules directly into its own goal to so hard you’ll work yourself into a stalemate and spend five minutes finding your way back out, only to get defeated anyways. My one complaint with these is that they’re presented as unlockable tiers. You need to win the crown in each difficulty to play the next, and after a while I really didn’t want to bother with the easy AI. Better to let players find their own levels, and allow them to avoid the boredom and frustration of facing off against AI that’s too simple or too difficult.

From what I’ve experienced, the multiplayer is designed quite well. Each player has to declare readiness and work within a turn timer, and connectivity hasn’t been an issue while I’ve played. Finding a match has been, though. Hopefully this will improve as more players jump in, but you might want to go in with a Game Center friend or a local buddy in the meantime. There’s no real ranking or stat tracking to speak of, so it doesn’t really matter who you play with — this is a great game for filling a few empty minutes with a friend, but it’s not a serious multiplayer experience.

Globulos Mania has room for improvement. Aside from the issues I’ve already mentioned, I’ve run into a few small annoyances. There’s no way to check the rules of a game once you’ve started it, so if you’re wondering what the win conditions are, you’re out of luck. And it can be difficult to see where you’re aiming when the arrow is under your fingertip, so you may lose some precision. But if you’re into it, this is a great game. There’s a ton of content no matter how you want to play, and plenty of achievements to go with it. If you’re looking for hours of multiplayer and single-player content and don’t mind slow and slightly repetitive play, this is your game. Go get it, and then bounce by our discussion thread to tell us what you think.