If you missed out on our WWDC preview, allow me to calibrate your expectations about Tiny Heroes [$2.99], a new tower defense title from Simutronics Corp. You may have heard that the team behind this game was headed up by David Whatley, the developer of the outstanding geoDefense [$1.99 / Lite] and geoDefense Swarm [$1.99]. Already your brain may be whirring along, thinking about upgradeable towers and mazing. Stop that. You won’t find those here. And you won’t miss them, either.

In Tiny Heroes, you are the master of a dungeon rich with treasure. In classic Dungeons & Dragons style, where there is treasure, there are heroes. Are you going to sit back and let them take your treasure? Heck no! So you set up defenses in their way, and who can blame you if a few of those defenses are a touch lethal? You have liability insurance, right? 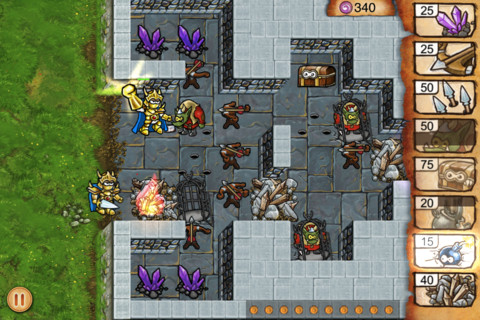 Once you push past the first few levels, which introduce you to the basics a bit too slowly, you’ll find a game that has more in common with Plants vs. Zombies than geoDefense. The first clue is in the resource management: rather than profiting from killing heroes, you build mana stones that generate mana every few seconds. You use that mana to build your defenses, which are designed to block the oncoming heroes. Why politely leave a path for them to travel down when you can stop them in their tracks?

As you progress through the game, you unlock all manner of vicious defenses. Spike traps, catapults and barricades are just the beginning. You’ll get so many that you won’t be able to carry them all into battle. Instead, Tiny Heroes requires you to strategize and pick your poison before starting each stage. You’ll need to learn how to combine your most brutal traps with static defenses and creatures to effectively guard your treasure, and you’ll need to make sure you have the resources to pull your plan off. 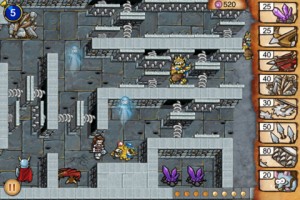 But for each imaginative defense you set up, the heroes are ready to counter it. Knights march in with a single-minded appetite for destruction, thieves dismantle your traps from a safe distance and wizards take out your mana crystals, starving you for resources. Once you get a handle on defeating them, you’ll find yourself facing epic versions of each. Your unbeatable combo may be able to take out basic knights with ease, but then an epic ranger will sweep in and keep things balanced.

It’s the dungeon layouts and pathing that take Tiny Heroes from Plants vs. Zombies clone territory to something quite different, though. Each level has a unique layout, requiring an original strategy. The level layout can help or hurt the heroes, because they don’t travel in the ways we’ve come to expect. In most tower defense games, enemies use basic pathing logic. They’ll travel down the path that takes them to their goal most quickly, to hell with the consequences.

In Tiny Heroes, on the other hand, the heroes are a little more complicated. In their tiny brains they have a drive to explore, to find the best path based on what they can see. While this does occasionally lead to weirdness, like heroes wandering back and forth under fire, it also means that they put up a good fight — and that you can trick them. 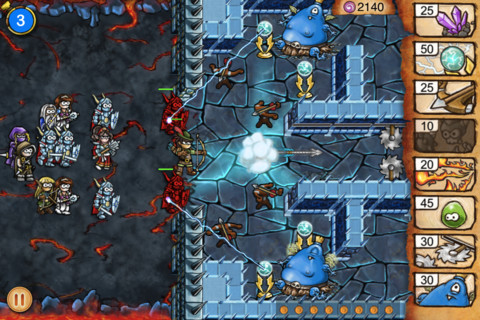 For a game about the wholesale slaughter of friendly adventurers, Tiny Heroes is surprisingly adorable. Big goofy eyes can be found on the heroes and more of the defenses than you’d expect, and the animations are similarly charming. The only thing that’s missing is music. I’ve spent hours on end with this game and haven’t minded the lack, but if you’re auditorially inclined you’ll certainly miss it.

But otherwise, Tiny Heroes is a complete package. The two included campaigns are huge and challenging, and there’s a third coming as a purchasable update. The Game Center/OpenFeint achievements are done beautifully: you’re rewarded with new defenses for completing groups of them, adding quite a lot of replayability to the game. You can play through in Campaign Mode, and then replay individual levels for higher scores and achievements in Quick Play. There are also challenge levels to be had, and these put your skills to a serious test.

There is one in-app purchase available, but let me stress that it’s totally optional. The Defense Expansion gives you four new defenses that aren’t available in normal gameplay. They are very slightly overpowered, but this is by design: they’re there to help people who find the game too frustrating. If you’re stuck and you’d rather not pay, the developers have a series of walkthrough videos available on their website, and forums to discuss strategy.

iPad users are currently out of luck, but according to the developers an iPad version is planned. It’s expected to have it’s own set of levels that take advantage of the extra screen real estate, so it should be worth the wait.

I can’t say enough about Tiny Heroes. It’s a fantastic game, with few flaws to speak of. Challenging, but rarely frustrating, it had me returning to levels again and again to improve my score. By turning genre conventions on their heads, Tiny Heroes succeeds brilliantly. And you don’t have to take my word for it alone — our discussion thread is packed with fans. Who wouldn’t want to throw down against a bunch of greedy do-gooders, just this once?